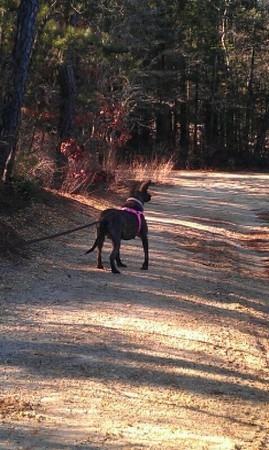 A New Jersey man hiking in a state park said he was was alarmed to see a pit bull running down a sand path dragging her leash behind her. Bayville resident Frank Dellarosa encountered the dog Friday while walking near a cranberry bog in Double Trouble State Park.

Dellarosa managed to catch up with the one-year-old pit bull mix, and assuming she was lost, picked her up and started to walk back towards the park’s office, intending to turn her in.

But “Lilly” was restless, and had other plans. When Dellarosa paused to to put her down and she began frantically pulling him down the path, back towards the direction they had come from. Surprised by her determination, Dellarosa decided to follow her. In a matter of minutes the cause for her consternation was apparent: Lilly led him straight to her owner, who was laying unconscious, about 150 yards from where Dellarosa first saw the dog.

Dona Timoney, 51, of Beachwood, had suffered an undetermined “medical event” while walking Lilly, Detective Sgt. James J. Smith said. “She was unconscious, but breathing,” he said.

Timoney is being treated at St. Barnabas Medical Center in Livingston. Detective Smith said her condition had not been disclosed.

Lilly is staying with Timoney’s daughter, who said Timoney had previously rescued the dog from a “drug house” in North Carolina. Apparently Lilly never forgot that act of kindness, and when given the opportunity to return the favor, came to the rescue of the woman who had rescued her.

Detective Will Cullen responded to the scene, and said Lilly and her owner obviously shared a special relationship. “The back of her car was filled with treats and bones,” Cullen said. “She’s obviously an avid animal lover.”