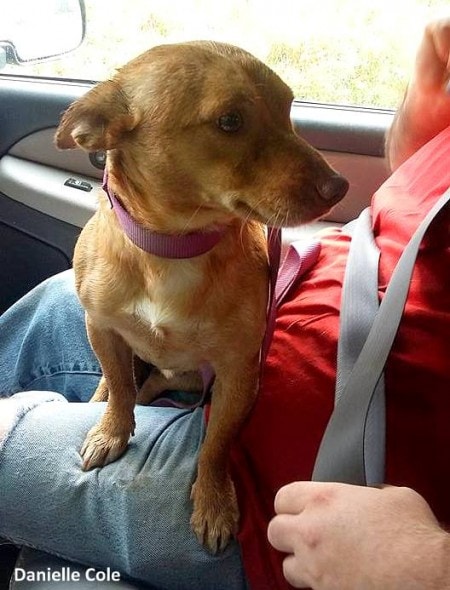 Dion Cole was running late for work on a day back in September when he witnessed a man tossing a dog out of his vehicle and taking off.  The confused dog chased after him until his legs collapsed.  Dion and his wife, Danielle, spent the next two days trying to catch him.  Danielle wrote an open letter and posted it online, hoping it will reach the man and bring some shame to him.

This letter has been edited only for legibility:

To the dirt bag that threw his dog out in the Allegan Forest on 48th street Friday at about 3:30pm. Let me tell you what your dog went through: as you sped off, your dog chased after you and ran as fast as his little legs would let him until his legs gave out and collapsed on the side of the road. My husband saw this all happen.  He stopped to help your dog but the little guy was so scared that he ran into the forest and hid.

Later that evening we went to look for your dog, and he was right where you left him, waiting for you to come back.  Once again, he ran, scared for his life. Saturday morning I took some treats and my dog in hopes that he would feel comfortable enough to come up to my dog. Well, he was thinking about it but then someone else stopped to help and he ran back into the forest.

A couple hours later we were heading to the fair and I just couldn’t stop thinking about this poor little guy who was thrown from a car, lost, and confused so I decided I would take a bowl of food to him and leave it where he has been hanging out. Once I turned into 48th St there was a group of hunters, a nice family, and an older man trying to catch your dog. He was terrified, but with patience and the help of a sweet little boy, we were able to catch him.

How could you throw your dog out like a piece of trash? This handsome little guy is so sweet and loving – he loves my kids, especially my son, and he likes my other dogs. I truly believe my husband was supposed to be running late that day so that he was able to see what you did. It’s just too bad he couldn’t get your plate number. You are a real scumbag and you will answer to what you did one day.

Though the post has gone viral, who knows if the man will see it?  Who knows if he will care?  While it was rotten of him to throw the dog out, if he would do such a thing at all, there’s no telling what else he would do.  It’s very fortunate that the right person saw what happened, and that he and his wife (as well as the others) were so dedicated to making sure the pup was captured and brought to a good home.