On February 12, 2016, the Animal Rescue League in Pittsburgh fought hard to save an emaciated three-month-old Pit bull mix puppy found abandoned in an snow-covered lot.

The underweight dog now named Falcor was exposed to frigid temperatures and against all odds and with no muscles or body fat to protect him from the harsh winter weather, he clung to life until rescuers came to save him. 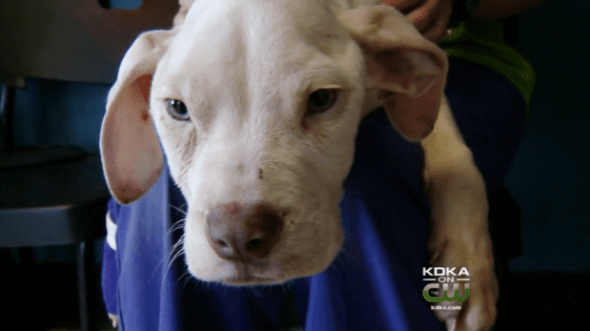 The young dog was tossed in a field at the intersection of Bennet Street and Hale Street in Homewood. This crossing experiences heavy traffic flow but incredibly hardly anyone noticed the white dog freezing to death.

Finally, an animal lover stopped to check on the dog and it was this person who saved him. Falcor was pulled from the snow and rushed to the Animal Rescue League. Veterinarians examined him and said he was 15 to 20 pounds under weight and miraculously doesn’t suffer from any parasites or internal injuries.

Whoever had him purposely neglected him and starved him to death. This was done before he was tossed in that field to die a slow painful death.

Falcor is extremely malnourished and veterinarians don’t know for sure if he will pull through. They are hopeful his fighting spirit will help him regain strength and eventually make a full recovery. 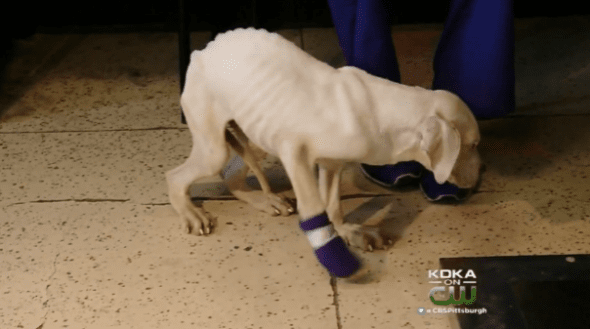 “He doesn’t have the strength to stand up, he can’t stand for more than 30 minutes at a time,” St. Landau said. “He’s got a wound on his paw [and] he doesn’t have enough muscle so he essentially stands on his wrists and elbows.”

The puppy’s recovery will be slow but if luck is on his side he will fully recover.

To learn more about Falcor and his recovery, visit The Animal Rescue League’s website and Facebook page.