When Bobbie Wallis from Friends Fur Change in Chickasha, Ok., agreed to help rescue a mama dog and her puppies abandoned in the woods, she never imagined it would take her and her small team of volunteers days to save the entire family, but after three days of hard work all six dogs were rescued.

A woman named Carmen called the organization to report the abandoned dogs, at first the woman wondered if animal control could get the dogs, but because the woods where the pets were abandoned was outside Chickasha’s animal control’s jurisdiction, the dogs wouldn’t be picked up. Nevertheless, Wallis told the woman she would try to rescue the dogs herself.

Wallis enlisted volunteers to head to the woods and attempt a rescue. The area where the dog family was hiding had heavy brush surrounding it and the first rescue attempt was not 100 percent successful. 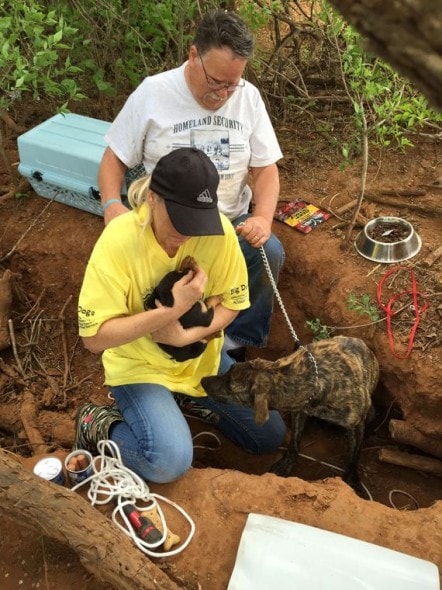 Rescuers spent hours luring the dogs and were only able to secure two puppies and their mom. The three of them were transported to a foster home while other rescuers stayed behind and tried to clear the dense woods around the dogs’ hiding spot.

The day turned into night and rescuers succeeded in capturing one more puppy, but the darkness of the night forced volunteers to postpone their rescue efforts until the following morning. A humane trap with food and water was left behind and everyone hoped the dogs would come out of their den on their own.

The following day volunteers returned to the woods to check on the trap, unfortunately it had not been touched and there were no signs of the puppies anywhere. Throughout that second day volunteers checked on the trap numerous times but always found it empty. By the end of the day rescuers feared the worse had happened to the lonely pups.

On the third day, Wallis brought mama dog to help rescue her remaining pups and it worked. With her on site and the help of more tasty treats, the remaining two puppies were successfully lured out of the den.

All six dogs are currently being fostered and mama dog has been named Carmel in honor of Carmen.

The five puppies are in good health, their mom on the other hand is a bit underweight, but now that she has been rescued, she is expected to gain weight and regain her health.

For more information on this family contact Friends Fur Change.