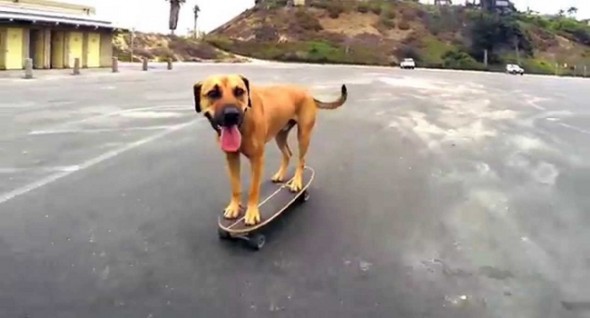 Dogs are amazing, but then, you probably already knew that.  But, did you know, that shelter and rescue dogs can sometimes be harboring amazing talents?

To start, here’s Rose, who was recognized in 2011 by  the Guinness Book of World Records f0r the most discs caught and held at once.  She was adopted from the Humane Society in 2005.

It’s not uncommon to see dogs catch Frisbees in pretty impressive ways- but only one dog can catch and hold seven flying discs one after another while holding on to each disc. Rose currently holds the record for. Rose was adopted from the Humane Society in 2005 and set her record in 2009 and had the record published in s in 2011.

Surfing dogs, whether on the water or sidewalk, are other canines that continue to impress and none more so than Abbie, who was rescued from the Human Society Silicon Valley.

Bamboo has got some great moves on his skateboard.  Mike Bolaris adopted rescue Bamboo when he was 8 weeks old, part of a litter that was found in the desert near San Bernadino, CA, from Labradorsandfriends.org.

And according to KEAN Radio, another former shelter dog is Jumpy, one of the top stunt dogs in the country.  Omar von Muller, Jumpy’s trainer, also had Uggie (the adorable Jack Russell who stole the show in the Oscar Award Winning movie, The Artist, but, sadly passed away last year), who was also a rescue.

So if you are looking to grow your family, remember to ADOPT DON’T SHOP! You never know what kind of talent you will find waiting just for you, even if it just a puppy who loves carrots.