Last Sunday, veteran Garrett Loughran went out to a Memorial Day weekend lunch with his mother and his service dog, Hershey.  However, they were rudely declined seating because the manager refused to allow Hershey inside.  The restaurant responded quickly by apologizing, firing the manager, and donating $2,000 to Pets for Vets.

Garrett has served four tours of duty in Iraq and Afghanistan, and understandably has post-traumatic stress disorder.  Hershey, a five-year-old Labradoodle, helps tremendously with his symptoms.  Readjusting to civilian life is not an easy transition, and being part of a crowd is stressful for Garrett.

He is legally allowed to bring Hershey, a certified service dog, with him wherever he goes.  But unfortunately, not all businesses acknowledge the law.

When Garrett’s mom took him out for lunch on the weekend meant to memorialize all the soldiers who did not return home, they were shocked to be turned away by the manager of Houlihan’s restaurant in Algonquin, Illinois.

“He had his red cape on that said he was a ‘service dog,’” mom Laura Wills told WGN TV. “We have the papers with us but she just said ‘Well, we don’t allow dogs in the restaurant. What type of service does he provide?’ And my son said ‘You’re not allowed to ask that.’” 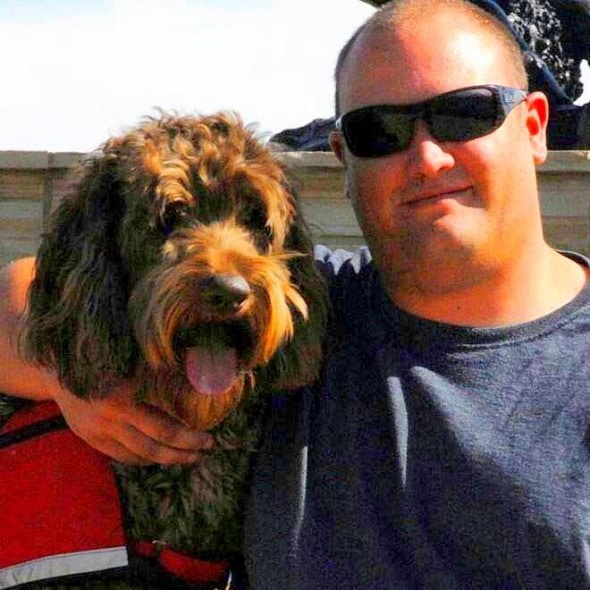 Technically, the manager had every right to ask what kind of tasks the dog has been trained to perform, but should not have turned them away.  The family left, dismayed by their treatment.

“I expected that by this day and age that everybody knows what service dogs are and they should be more accepting of veterans like me who have to have a service dog to acclimate themselves to this new world again,” Garrett said.

They complained to upper management, and a senior manager immediately responded.  They amply apologized in a letter.

“There is no apology that is sufficient in this circumstance. This is inexcusable. I will ensure this is addressed and that no other person has to endure what you and your son did today.”

Later, an official statement was released:

To be perfectly clear:  Houlihan’s supports and appreciates all veterans and the sacrifices they have made and continue to make for this country.  We have and will always allow service dogs in our restaurants.

The manager of the Algonquin branch of Houlihan’s was fired (which may have been an overreaction when only admonishment was really necessary for such a situation), and $2,000 was donated to Pets for Vets, the reported cost of training a service dog for a veteran.  As touched as they were by the offer, Pets for Vets feels the money should actually go to a different foundation:

Pets for Vets would have been honored to have worked with the veteran who was mentioned in the news report on WGN TV late yesterday. However, Pets for Vets provides trained companion animals or emotional support animals to our veterans, not service dogs.

While we appreciate Houlihan’s offer to donate $2,000 to Pets for Vets, we believe those funds should go to Paw Pals Assistance Dogs, the organization that appears to have trained the service dog in the report, so they are able to provide a assistance dog to another veteran in need.

We thank everyone for their support and their continued compassion for our veterans who suffer from PTSD.

Either way, Garrett and his family are truly touched by the outreach they have received, and feel that the amount of awareness raised by this incident is priceless.