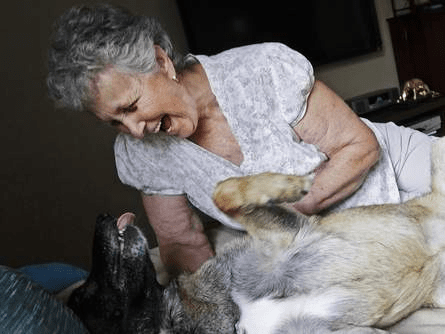 Jukon nearly gave his life serving for the U.S. military as an explosives detection and patrol dog. Now the retired five-year-old Belgian Malinois is enjoying life in a caring and loving home.

Jukon served in Iraq helping to keep other soldiers safe by sniffing for dangers like IEDs. The tough conditions in Iraq nearly cost him his life.

“He actually almost did when he got home from Iraq,” said Judie Mindrum. “He was already in chronic renal failure due to the heat and the work that he did. The heat over there, if the handler isn’t paying attention, will actually cook the pads off their feet.”

Mindrum is now providing Jukon with a much better life. For years Mindrum had sent care packages to military working dogs and had always hoped to adopt one. Then two months ago she got the phone call, Jukon had just retired and would need a good home, Mindrum was thrilled to be able to give it to him.

“The minute he got off the airplane and into the concourse I was crying like a baby at first sight,” said Mindrum.

Jukon had to undergo some training to learn how to be a pet and Mindrum had to learn some training as well. Mindrum has learned to not use certain hand motions the Jukon knows as military commands and only spells the word bite instead of saying it. The two are getting along well though and Jukon is settling into life as a pet.

“This was a dog that was always in a kennel” said Mindrum. “He never had anyone roll around on the floor with him.”

Now Jukon has a big yard to play in and lots of love and attention from Mindrum and her husband.

1 thought on “Retired Military Dog Settling in to New Home”