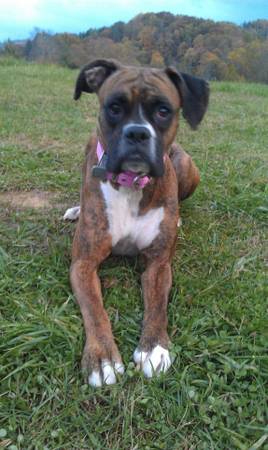 It was a happy reunion for Casey Fulp and his dog Laysha after the two were involved in a car accident.

Laysha is more than just a friend to Fulp. Laysha helped Fulp when he retired from the military and suffering from a deep depression.

“She was definitely essential in my recovery,” said Fulp. “Those times where I was feeling down about things and didn’t want to do anything but sit around at the house, she would sit there with a toy and be like hey, let’s go play. She helped me transition back to talking to people.”

The two were involved in a car accident on June 21st and Laysha went missing. Fulp was determined to find his best friend. Soon the community was determined to as well. Word spread about the missing dog and everyone was keeping an eye out for her.

Adam Lawrence is the man responsible for helping to bring Laysha home. He works only a mile away from the scene of the accident and while at work he spotted a dog. He tried to approach her but she began to run away, then Lawrence remembered the missing dog’s unique name.

“As soon as I said Laysha she instantly turned around and ran to me,” said Lawrence.

Laysha had some injuries from the accident, including a fractured pelvis, but she is home safe and sound now being spoiled by Fulp who is relieved to have her home. For Laysha it was obvious she was relieved as well to be home.

“It was almost like a weight was lifted off of her shoulders when she walked through the door,” said Fulp. “I’m sure it was as good for her as it was for me.”