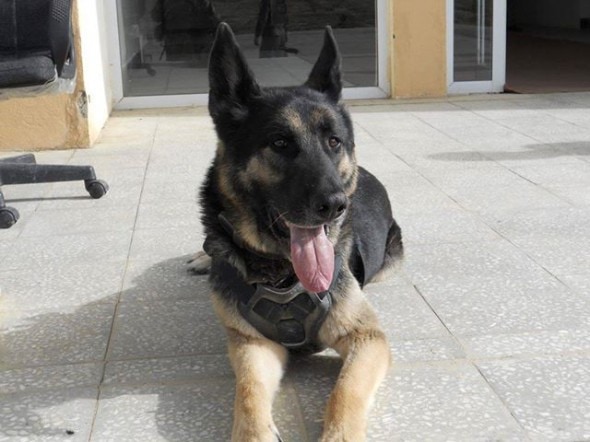 Alf, a retired military working dog, was laid to rest Thursday wrapped in an American flag as soldiers, veterans, family members and other working dogs said their goodbye in Colorado.

Alf was a military working dog who served six tours of duty all around the world. In 2010 he was assigned to Sgt. Edward Pfeifer and the two served together in Germany and Afghanistan. When the two returned to the United States Pfeifer adopted Alf.

A year after being adopted Alf was diagnosed with a genetic disease called Canine Degenerative Myelopathy.  It caused Alf to be paralyzed from the hips down and eventually would cause him to be completely paralyzed. As Alf weakened Pfeiffer had to make the difficult decision to say goodbye to his friend and war hero.

“He has to be put down,” said Sgt. Pfeifer. “I really don’t want to do it, but we have no other options anymore.”

Military working dogs are not given military honors when they pass by the government, but Pueblo Volunteer Association heard about Alf and his condition and decided to do something for him.

“All the veterans organization and military units going there, if a veterans organization invites a military organization, they notate that Staff Sgt. Alf is memorialized, and it can be introduced into the national archives. There is no legal procedure for that, that’s the highest honor we can give Alf,” said the Pueblo Volunteer Association’s Vice President Salvadore Torres.

A memorial was held for Alf at Roselawn Cemetery. Over 150 people attended the ceremony including veterans from more than three different wars. Members of the Pueblo Veterans Ritual Team gave Alf a three-volley salute. He is the first dog in Colorado to be given full military honors and will be remembered by many.

“To my partner and best friend: Rest in peace. Thank you for keeping soldiers and myself safe and out of harm’s way,” Pfeifer said at the memorial. “You will always be in my heart and I will never forget you. It was an honor to serve with you and be known as your handler and dad. I will miss you with my whole heart and I will go on. Thank you for all the good memories we shared.”