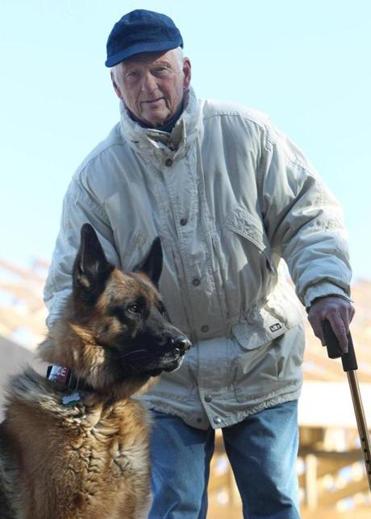 Lyman Pope is a big dog lover. He made a fortune in real estate, and now the 85-year-old retiree is using his wealth to give back to the dogs that he loves. Pope is spending hundreds of thousands of dollars to build and improve animal shelters in Maine, Vermont and New Hampshire.

Pope grew up loving dogs, specifically German shepherds. He didn’t get involved with helping shelters until later in life. When he first started visiting shelters back in 1999 he was upset by the number of abandoned and abused animals. Having made his fortune in real estate he knew he wanted to help.

“If you care about dogs, you know once they arrive at an animal shelter, they’re in some trouble,” said Pope. “The shelters are always in trouble. They never have enough money. It doesn’t take long to become empathetic, very sympathetic, because it’s a difficult thing for the people who manage them and for the animals who are in there.”

Last Wednesday, Pope and his beloved German shepherd Max visited a new shelter in Concord, New Hampshire that is under construction to check on its progress. Pope donated over half a million dollars toward funding the construction, but it isn’t the only shelter that Pope has helped to build.

Shelters in Knox County, Maine and Orleans, Vermont proudly display the Pope name. At the Pope Memorial Humane Society in Knox County Pope has agreed to match all capital campaign donations received by the end of the year, up to $100,000. The funds will go towards the construction of a new shelter facility.

“He has been to all these shelters, and he knows what works and what doesn’t work,” said Tracy Sala, executive director of the Pope Memorial Humane Society. “He tells you what you’re doing well and where you can improve, so he has raised the bar. He’s been walking the walk for so long, and you’d be foolish not to listen to him.”

Pope plans to continue giving back to shelters as much as he can and has already made provisions in his will to make sizable donations once he passes away.