The highly trained animal performed the honors as board members and guests of the national charity called attention to how heroic dogs have worked to protect and comfort people for generations, including their valiant service following 9/11.  Some 300 search-and-rescue dogs, service dogs, and therapy dogs served their country by helping lead people to safety, finding survivors, bringing closure to grieving families, and comforting the living. They will be recognized tonight during American Humane Association’s “10th Anniversary Tribute to the Hero Dogs of 9/11” at the National Arts Club in New York City.  The evening will feature Whoopi Goldberg, Victoria Stilwell, Rin Tin Tin and more than 200 VIP supporters of American Humane Association, which assisted the heroic animals in the days following September 11th with its 82-foot mobile veterinary clinic and Red Star™ Animal Emergency Services teams.

This Rin Tin Tin is a twelfth generation relative of the original puppy found on the battlefields of France during World War I. That puppy evolved into the model for a military training program for search and rescue dogs at Camp Hahn in California in the 1930s. A subsequent Rin Tin Tin became the most highly paid TV actor in America during the 1960s in a children’s show. It featured the dog and his owner, a boy named Rusty, who depended on the dog’s search and rescue skills. The current Rin Tin Tin continues that tradition by serving as a member of an elite search and recovery unit in Arkansas.

“Rin Tin Tin is a magnificent symbol for the heroic work of American Humane Association’s Red Star™ Animal Emergency Services, which, like Rin Tin Tin, began its life on the battlefields of World War I,” says American Humane President and CEO Robin R. Ganzert. “The federal government requested Red Star™ to become a ‘Red Cross for animals’ when many of the half million American horses shipped to World War I European cavalry units suffered grievous wounds.” 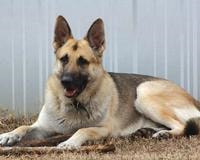