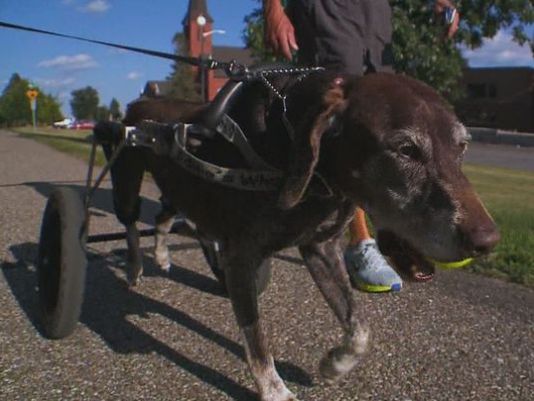 Herby and Carol Mader of Albany, Minnesota are proud parents of River.  River is a bit of a celebrity dog in his home town, and never misses an opportunity to interact with the locals.  While out and about in Albany, River seems to want to meet everybody he comes across, bringing smiles to the faces of everyone he does.

“River touches everybody’s heart,” said Lu Ann Jopp after meeting River while walking downtown.  “Everybody has to come by and pet the dog.”

River wasn’t always in a wheelchair.  In a stroke of very bad luck, River was attacked by two much larger dogs.  The dogs in question were not on leashes, and while River was on his walk with his mom Carol, he was pounced on, and he lost use of his back legs.

When the two larger dogs has first come across River and Carol, she didn’t think too much of it.

“I wasn’t really scared or anything, until they started attacking,” said Carol.

River was bitten very hard, directly on the spine, several times.  This could have made a previous injury to River’s back much worse, causing him to lose all motion in his hind-quarters.

So now, River still enjoys his walks with Herby and Carol around town, he just has to strap on his doggy wheelchair to help him do so.  Even though River was injured once before the attack, being hit by someone on an ATV, and then being bitten by the two bigger dogs, River still has one of the best dispositions of any other dog in town.

“Probably a lot of dogs would give up, you know, where he hasn’t,” said Herby.

Doctor Wendy Womack calls River a “regular icon in Albany.”  For an 11-year-old dog with these types of injuries, doctor Womack says River is in top notch health.

“They’re very devoted,” said doctor Womack, remarking on the fact that many other pet owners would have instead, opted to put River down after going through what he has.

River really does still love to take his four to five long walks through the streets of Albany.  To everyone that he meets along the way, River brings a smile to their face, and a little more brightness in everyone’s day.  What an incredible effect to have after going through so much.