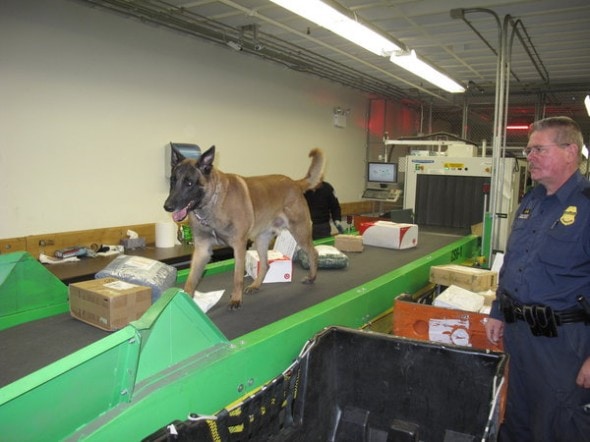 A 5-year-old Belgian Malinois name Rogue is being called a “wonder dog” by the U.S. Customs and Border Protection agency. Rogue works with CBP to search parcels at the Chicago International Mail Branch near O’Hare International Airport.

Rogue came to work in Chicago from Cincinnati last April. “He transferred from our CBP Cincinnati express consignment operation last April and has now found more than 600 shipments of opium here in Chicago, valued at more than $4 million,” said Steven Artino, CBP director of field operation in Chicago.

Rogue’s most recent find occurred on September 11th. He found two suspicious shipments  from Laos. Rogue alerted his partner and other CBP officers to the shipments and they discovered 28 pounds of items saturated with opium. These two shipments alone were valued at $302,000 according to the CBP.

Rogue is part of a CBP canine crew that works in Chicago. The crew includes not only Belgian Malinois but German Shepherds, Labradors and Beagles. These dogs are trained to not only detect illegal narcotics, but large amounts of currency, explosives, humans, dangerous food and dangerous plant material. In total there are 1300 dogs that work as part of the CBP throughout the United States.