A little Chi-weenie named Trixxie had her life saved when Happy, the neighbor’s Rottweiler, prevented her from becoming a coyote’s breakfast.

Early one morning back in 2010, Trixxie was put out on a chain to take care of her business while her owner did the same inside.  She was only out there for a few minutes when a coyote ambushed her.  The chain prevented the coyote from running off with her in his mouth. 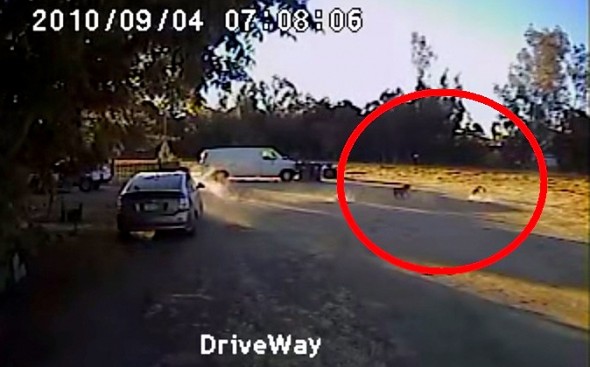 Trixxie ran back toward the house, but the coyote was fast, and immediately grabbed a hold of her and tried to take off.  Thankfully, next door neighbor Happy was outside and saw what happened.  In no time at all, he bounded over and startled the coyote into dropping Trixxie.  As she ran to safety, Happy chased the attacker off for good.

Many people had questions and derisive comments for Trixxie’s owners, who could not be faulted for what happened.  They were not filming the attack – the video comes from a surveillance camera.  She was only outside for a few minutes, and being in the middle of a city, the family had never known there to be coyotes in the area.

The important thing to note is that a Rottweiler saved the life of his neighbor and friend.  Trixxie only suffered a few puncture wounds, and her owner says she is far less traumatized by the event than he and his wife were.