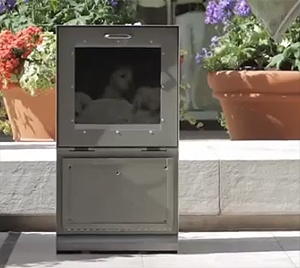 The San Francisco SPCA has launched the second phase of its highly creative public education campaign which aims to raise awareness of the cycle of puppy mills and its impact on society. As part of its guerilla marketing campaign, the organization has installed a “puppy bin” in the highly trafficked plaza at the intersection of Sacramento Street and Drumm Street, near the Embarcadero center in downtown San Francisco.

The bin, similar in size to puppy mill cages, looks like a typical newspaper stand and features sound and video portraying puppies. Within the bin is a newspaper, The Canine Tribune, featuring articles and stories designed to educate readers about the realities of puppy mills as well as alternative options available to those who want a dog. The campaign has provoked significant reaction from passersby.

“We wanted to do something completely unique in order to grab people’s attention and really drive home the deplorable conditions puppy mill dogs are forced to endure,” said Dr. Jennifer Scarlett, veterinarian and SF SPCA co-president. “This bin is a powerful reminder that we are often duped by false advertising. When San Franciscans buy puppies online, they unwittingly purchase from puppy mills, perpetuating a cycle of misery that benefits only the mill owners and puppy wholesalers.”

A recent SF SPCA survey of San Francisco dog owners showed the internet is the number-one source of puppy sales. “We are inundated with traditional advertising on a daily basis so we needed to find a way to break through the clutter in order to demonstrate the well-documented abuses dogs suffer in puppy mills every day, including lack of access to veterinary care, hunger, forced over-breeding, lack of shelter and rampant disease,” said Jason Walthall, SF SPCA co-president. “By raising awareness in this creative way, we aim to educate current and potential dog owners in the hope that they will make the right decisions about where to get their dog.”