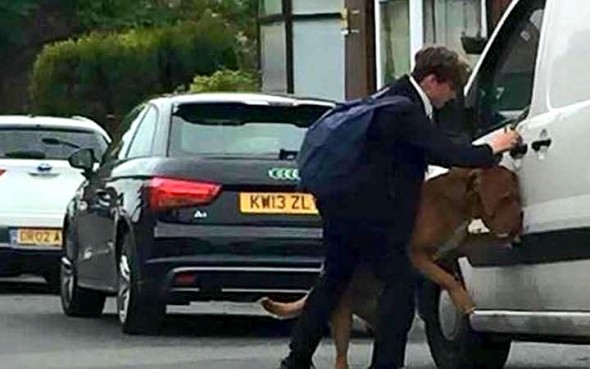 A Manchester, UK boy didn’t give a second thought to his own safety when he rushed to help a dog who had jumped out of a van window and would have surely choked to death.  But because this one young man heroically took action, Boo is alive and well today.

Thirteen-year-old Bradley North was on his way from school when he passed by a van with a smashed window.  A Dogue de Bordeaux was inside, apparently the vehicle’s vandal.

“When I first saw the dog, I thought that the window was partially down but there was glass on the floor and he had his front paws out towards us,” he told the Manchester Evening News.

“Me and my friends waited for five minutes for the owner to come back to the van but the dog ran up and jumped through the window and started to hang himself.

“I lifted him up slightly so he would stop hanging himself then I managed to unpick the buckle on the lead and managed to save him. 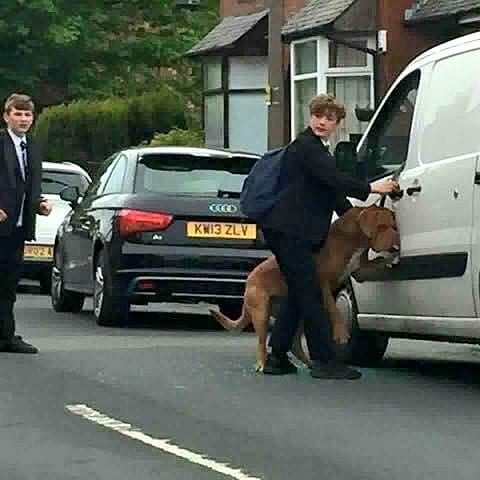 “I have dogs myself.  I would hope someone would do that for me and help my dog. I was a bit scared, but as long as the dog was ok.”

Passerby Alenka Kilmas snapped a few photos of the incident.

“It was a very big dog, I think it was bigger than the schoolboy,” she said.  “It was bleeding from its feet. I saw the owner afterwards and she was very grateful.”

She posted the photos on Facebook, which drew a lot of praise for North.

“That was a brave and courageous thing to do,” commented Gemma Moule. “Dogue De Bordeaux’s are big dogs, albeit gentle giants, but under the circumstances, you thought only of saving the dog’s life.”