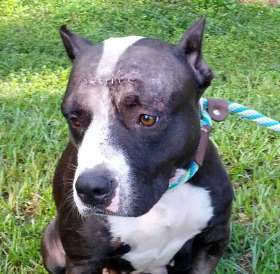 An investigation is under way in Jacksonville, Florida on the abuse of a pit bull mix named Flo. On Friday morning Flo was found with severe head injuries. She was brought to the Jacksonville Humane Society where they performed emergency surgery to save her life.

Flo’s injuries were very serious. The front of Flo’s skull had been crushed, several of her teeth knocked out and she had a long gash on her back. “There did not appear to be any damage to the brain, but there were metal fragments around the wound, leading doctors to believe it was a hammer. To create that large a hole in the skull and the cracks emanating from it took a lot of force,” said Denise Deisler, Executive Director of the Jacksonville Humane Society. Metal fragments were also found on Flo’s teeth, many of which had been fractured. There were also scars on Flo’s body suggesting she had suffered previous beatings and abuses.

Flo spent almost three hours in surgery. Nine pins were placed in her skull to hold it together. Flo is recovering well and throughout her whole ordeal has been sweet and gentle. Now the focus is on getting Flo fully recovered and finding those responsible for this abuse. The Humane Society is asking people to help fund Flo’s recovery through the Bo Needs Help Facebook page. The page was set up by the Jacksonville Humane Society back in June when they saved another dog, named Bo,  who was found badly abused. Bo is now fully recovered and with new owners. The Jacksonville Humane Society is hoping for a similar happy ending for Flo.

An investigation is under way to determine who is responsible. “We want to know who did this and we want them off the street and not able to do it again,” said Deisler. Anyone with information about Flo’s abuse is asked to call Crime Stoppers at 1-866-845-TIPS.