A street dog in Guayaquil, Ecuador nearly lost his life in a sewage canal that was too steep for him to climb, had it not been for the lone, redeeming human being who noticed him struggling and got him out and onto dry land.

The dog was soaking wet, filthy, uncomfortable, and obviously unable to scale the embankment.  He kept trying to get up, and looking towards everyone to help him. 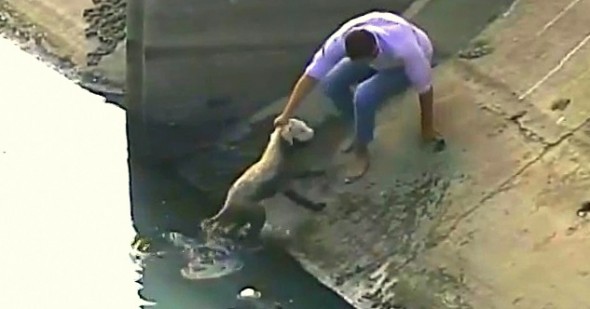 A surveillance video captured the moment when a man saw the dog and realized he couldn’t let him suffer and possibly die down there.  Who knows how many people saw him and just kept going?

The kind-hearted passerby motioned for others to help him, or at the very least, to watch his shoes, which he removed to climb over the railings and make his descent toward the sewage-coated dog.

After a couple unsuccessful attempts to lure the dog to him, the man knew he had to get much closer to the water, risking falling in himself.  The dog came near enough for the man to grab his scruff and slowly back up the slope.

Once near the top, another man lifted the dog up and over the side.  A rope was thrown down to help the first man back up.

It is unknown what happened to the dog after that – we can only hope that he was at least given a bath and some food, and with any luck, a home.