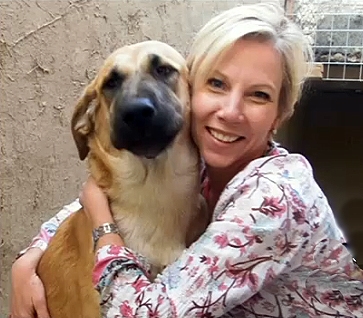 A dog born in the harsh deserts of Afghanistan is enjoying a new life on American soil after being adopted by the woman who saved him from death.

Bear, a 1-and-a-half year old mutt, has a new home in Arlington, Virginia. He was born on a United States Marine base in Helmand Province after his mother was taken in by US troops who took him out on patrol and fed him scraps from MREs.

Holly Barnes was deployed in the region as a civilian contractor and says she fell head-over-heels in love with the young pup when she met him. “I was just drawn to him immediately,” Barnes said.

Which is why she was devastated when she heard that central command had found dogs on the base to be a distraction, and ordered that Bear and three other dogs be put down. She contacted the base and pleaded for a pardon: she was too late to save one dog that had already been destroyed, but the Marines agreed to let her fly the remaining dogs to a Nowzad shelter in Kabul, where they lived for 6 months until she was able to return to the US.

Barnes worked tirelessly with volunteers and the Soldiers’ Animal Companion Fund to find homes for all of the dogs, and the money necessary to fly them home. Her greatest reward came recently when Bear touched down in the US. She says the unlikely survivor finds joy in the simplest pleasures.

She also says the two have become best friends. “To watch him later that night feel grass for the first time…it was like a dream come true,” Barnes said. “He really has become the center of my world.”

Barnes said she plans to have Bear certified as a therapy dog to help returning troops adjust to life at home.

“He’s the best therapy I could have had,” she said. “I think we’re both meant to be together.”

100 thoughts on “Sentenced to Death, Dog of War is Adopted by the Woman Who Saved Him”