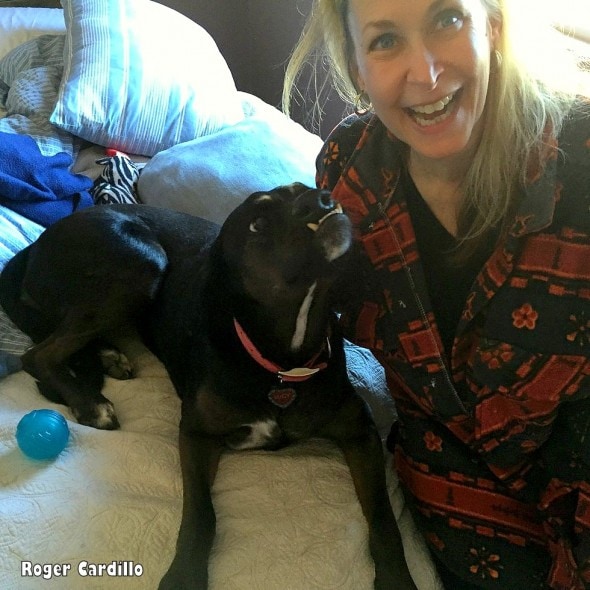 I walked through the first door to the dog kennels and immediately got tunnel vision. My focus became very narrow. The long, dank, gray corridor seemed to get longer. The barking dogs got louder.

The cages on either side of my eyes were closing in on me. It was as if I were in some sort of “Alice in Wonderland” movie come to life. I kept walking but felt I was not moving. The corridor kept extending with kennel after kennel containing more and more dogs. Their incessant barking became unbearable. They were crying out. “Pick me! Pick me!” I was in hell. I was at the county pound. And this was just the first door.

It was Oct. 6, 2010, and my first trip to Maricopa County Animal Care and Control‘s (MCACC) east side location in Mesa, Arizona, to choose dogs. I had been working for a local no-kill rescue for a week. Although I had been doing volunteer animal rescue work for years, I never before had to choose dogs.

MCACC has three locations: East, West and the Cat Shelter. Each year, in Maricopa County alone, 94,000 animals enter the shelter system, making it the second-largest in the nation, only after Los Angeles County. 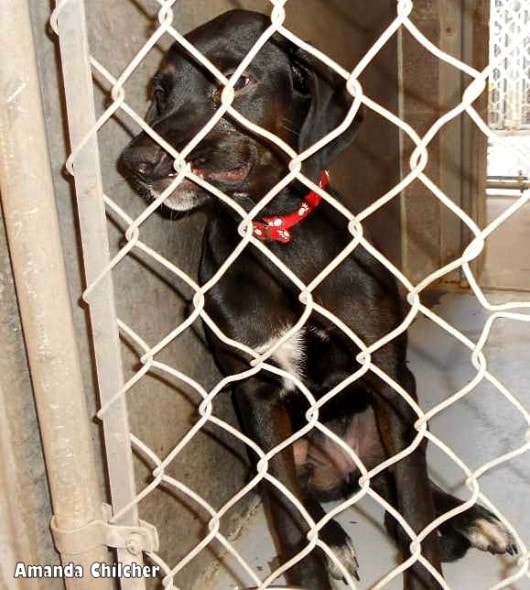 The volunteer who came with me had been pulling dogs for our rescue for years. She led the way and talked procedure. We were there to choose 10 dogs to bring back to our no-kill shelter.

I walked past some kennels and then I saw her. The little black Lab in kennel 204. I stopped dead in my tracks, fixated on her.

She had an underbite and appeared to have a broken or dislocated jaw, making her appear deformed. All the other dogs continued to bark, but she stared at me with sad, pleading eyes. At the same time she also wagged her tail and seemed so happy for some human contact. It seemed she might be in pain; the deformity looked painful in itself. When I bent down, I saw her eyes were gunky, and the only sounds I heard were her labored breathing and snorting, possibly due to her injury — an injury that would most likely deem her unadoptable.

“Not that dog,” the volunteer firmly said to me as she grabbed my arm and pulled me up and away. 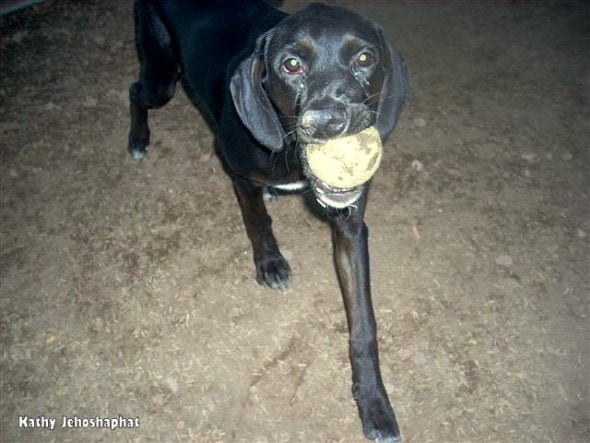 A promise made, a promise kept

As the volunteer dragged me down the corridor and through to the next door, we chose the small, cute, “adoptable” dogs. I could barely concentrate and couldn’t get the black dog out of my mind. I knew I was her last hope, and I was going to get her out if it was the last thing I did. I secretly named her Hope.

Before we left the shelter, I ran back to Hope’s kennel. It was as if she were waiting for me. She stared longingly. I did not have my cell phone with me, so I memorized her kennel number: 204. “I’ll be back,” I said. “I promise I won’t let you die.”

When we arrived back at the no-kill rescue, I ran to my desk and immediately began reaching out by email to my rescue network. I had to get someone to check on Hope, find out her status and help get her out.

My friend Kathy Jehoshaphat, an independent rescuer who often volunteered at MCACC, offered to check. She found Hope and brought her out to play in the shelter’s play yard where she found a tennis ball. “She was so sweet,” Kathy said. She found out Hope was on the E list (euthanasia list) for the next morning since the dog’s notes said she charged her kennel and was human aggressive. 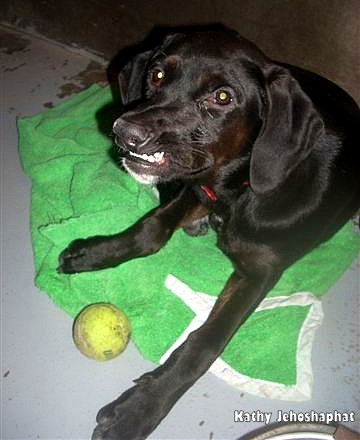 Kathy knew that was false as Hope wagged her tail “and licks you to death if you stick your hand in the kennel.” She wanted to ensure that Hope’s medical issues were not an excuse for the dog to die. “I took her to the foster coordinator and kennel manager to prove she was not aggressive, and they pulled her off the list for 24 hours to give me time to network her,” she said.

Kathy brought Hope back to her kennel with ball in tow. “When I went back at the end of the night to check on her she was sleeping with the ball in her mouth,” she said.

Networking on Hope took off. We had 24 hours. Emails and Facebook posts with her photos were everywhere. We knew that Hope needed a veterinarian to check on her jaw and that she needed a foster home ready to take her in. A rescue partner, Circle L Ranch Animal Rescue & Sanctuary/Feathers Foundation, stepped up to pull her off the E list. Hope was then transported to Dr. Eva DeCozio, medical director of VCA Apache Junction Animal Hospital, who offered a free initial checkup. 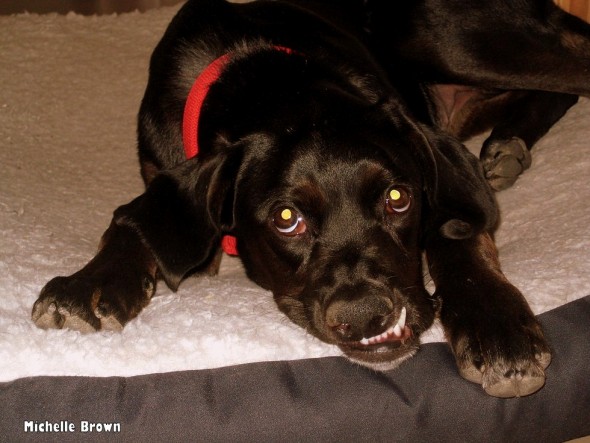 DeCozio determined the dog did not need to be euthanized. Hope had a healed fracture of her maxilla, or upper jaw, that occurred more than six weeks prior to her rescue in addition to a severe upper respiratory infection.

“I have seen dogs disfigured like that,” she said. “She is a little crooked, so big deal. I wouldn’t re-break her bones,” adding that Hope was able to eat, seemed to be fairly pain-free and was very happy. “She was just precious.” She recommended that Hope have some teeth extracted as they were interfering with her bite. That surgery was eventually done by her adopter’s vet.

“Sadly, look at our whole society,” DeCozio said. “It’s not just the animals treated that way. If you’re not perfect or meet certain standards then you are not worthy. Thankfully there are people who can look beyond that and see the beauty. Anybody who has adopted a disfigured, deformed, abused or special needs dog who doesn’t meet the normal standards will tell you how special these dogs are and how they are moved by these animals.” 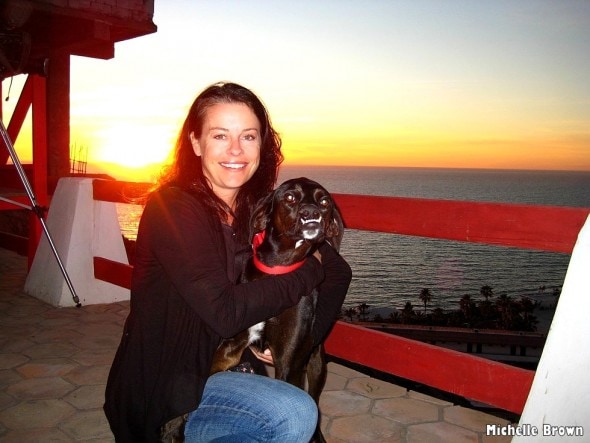 Michelle and Lucy enjoying a sunset by the water.

Off to the Rescue!

My rescue network put out a plea for a foster home. A woman on Facebook saw Hope’s picture and sent it to her sister, Michelle Brown, who had lost both her Labs over the past year, one of whom died the previous month.

“I’m not ready for a dog,” Brown told her sister. Her sister persuaded her to look at Hope’s picture. “The minute I saw her I said, ‘Yes. I need to foster that dog,'” Brown said. “My only intention was to foster her, but as soon as I saw the picture I knew I would keep her. It was the sad little face.”

Brown picked up Hope on Oct. 10, 2010. She planned to keep her name but Hope fast became Lucy. “I didn’t name her Lucy. The vet tech named her Lucy because Lucy ate the chart, got into trouble. The vet tech kept saying, ‘Lucy what did you do now?'”

Out of curiosity, Brown did some digging through Lucy’s information at the pound and found out the dog had been picked up by police as a stray. All things point to her having had a family at some point because Lucy was potty-trained and knew commands when Michelle took her home. Michelle’s vet believed Lucy’s injury most likely was caused by a bigger dog when Lucy was a puppy. Her jaw could have been fixed if treated immediately. 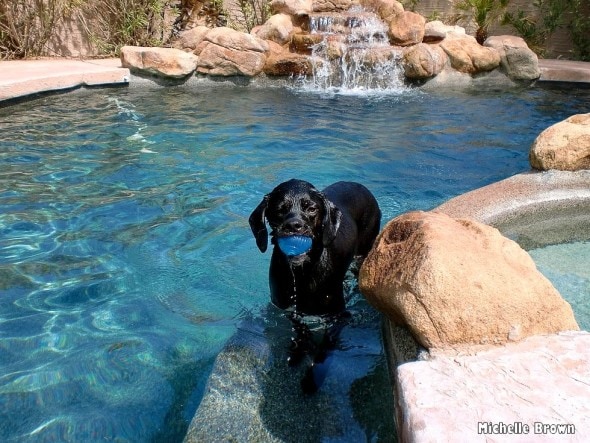 Was she dumped because of her deformity? We’ll never know.

Brown works from home full time and gets to stay with Lucy all day. She is a marathon runner and has found a great partner in Lucy who has a lot of energy and loves to run and swim. Lucy even ran a half marathon and has a medal to prove it. She is five-and-a-half and still loves to have a ball in her mouth along with any of her other stuffed animals.

Sometimes people mistake Lucy for a vicious dog because her teeth are visible, but Brown makes sure to explain her story, which puts people at ease and hopefully makes them think twice before reacting negatively.

“It horrifies me,” Michelle said, referring to Lucy having been passed over due to her facial deformity. “To know that she was that close to dying is horrifying. She is my whole world.”

It is difficult to truly tell a dog (or cat’s) personality when they are housed in a kennel at the pound. They are scared, stressed, in unfamiliar surroundings and with other unfamiliar animals, so their actions may be very different than if they were in a home. It’s one reason so many animals get overlooked or euthanized. 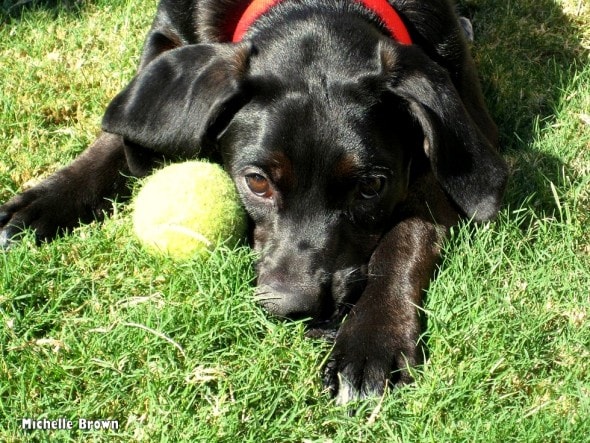 “Every dog should get a second chance, a second look,” Brown said. “There’s a dog out there for everyone. I wish people would stop buying them; it would solve a lot of problems.”

The county shelter in any city can be overwhelming, and it is easy to feel helpless and overwhelmed.

“There are countless animals like Lucy at the shelters who are overlooked because they are not perfect, so please give them a chance,” DeCozio said. “Because you will be rewarded a thousand-fold with love.”

It truly took a village to save Lucy. There are too many to mention individually here, but there were countless people and entities involved, including county employees, animal rescues, individual rescuers, veterinarians, vet techs and Brown, Lucy’s adopter. Not thanking them would be criminal. A huge thanks to all those heroes.

After five years, I was reunited with Lucy (formerly Hope) whom I had not seen since that day when I spotted her at the pound. Over the years, Brown reached out to me by email to send photos and keep me updated, but we never found the right time to meet until this month. 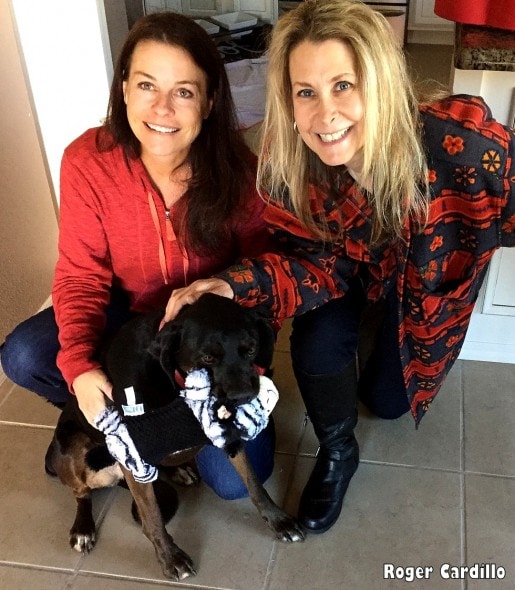 I am happy to report that Brown is a wonderful, caring woman. Lucy is happy as every dog should be. And I could not have asked for a better home for her. Seeing Lucy after all that time made it all complete. I saw her and knew that everything was right with the world, at least for that day. And, yes, we all cried.

You can help by adopting a dog or cat or by volunteering at your local shelter. Visit the Humane Society of the United States for resources to help.