The dog, a shepherd mix, had been left for dead when she was dumped, bloodied and emaciated, in a desolate Detroit neighborhood. But even then, she was a fighter, finding the strength to wander onto the porch of a local resident who called local rescue group HomeFurever for help.

“There were a lot of people on our Facebook page that thought she should be put down,” said volunteer Mandi Deveja told Fox2 Detroit, the person who showed up to help. “They didn’t think she would ever make a recovery.”

But the fighter continued to fight and several weeks later, after round-the-clock care and a hospital stay, the dog (who was named after her caregiver) was on track for a complete comeback.

“It is hard to believe that this is her now, from the day I found her,” Deveja said.

Those involved suspect Mandi was used as a bait dog. Area residents told the station that dogs are dumped in the neighborhood often, many of them already dead.

Mandi, whose story has been championed by social media support, has received lots of gifts and care donations; she will be up for adoption via HomeFurever by the end of the month.

Her namesake has grown attached and plans to stay in touch.

“Whoever adopts her will have to accept I will be part of their family forever and I will be visiting often,” she said. “And they will have to send me many updates….”

There is a meet and greet Fundraiser for Mandi on June 26. A portion of the proceeds will go to Home Furever. 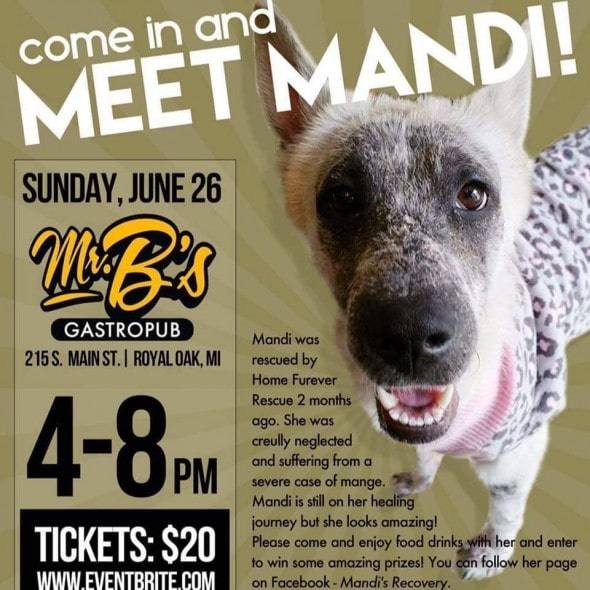