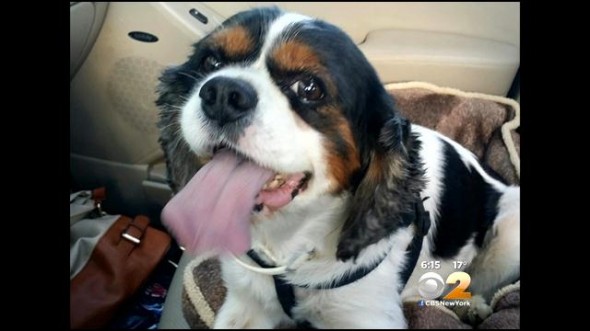 An animal shelter on Long Island, NY is threatening to adopt out a dog that was brought in to them, even though his family is simply out of the country attending to a sick relative in their home country, Columbia.  Lucky is now trapped in the middle of a custody battle of sorts, and the family is afraid of losing their dog.

Lucky is an eight-year-old King Charles Cavalier, and is a canine family member of Anthony and Michael Rivas, of Brentwood.  He was left in the care of a dog sitter, but somehow escaped the yard and was brought to Islip Animal Shelter and Adopt-a-Pet Center.

The shelter is now refusing to release Lucky back to the dog sitter, and will not turn him over to any friends or family members.  Instead, they are going to put him up for adoption.

Lucky’s family has called and begged and pleaded for the shelter to give their dog back to them.  They have called from Columbia, but to no avail.  The shelter says it’s within it legal rights.

The shelter released a statement on its Facebook page Monday, saying “Since the dog has no form of ID, no tags or microchip, there is no proof of ownership. Legally we have to put the dog up for adoption after being held for 5 days if no owner steps up.”

The strangest part of all of this, is the shelter is claiming they know who his family is.  In the same “press release” they have said, “We do know who the owner is, and that they are out of the country. They have been contacted and they have been made aware that the dog will be put up for adoption and placed with a good home.”

So it begs the question, if they know that Lucky belongs with the Rivas family, why not return him?  Why require some kind of proof of “ownership” if you already know all about the dog?

After being contacted by several news agencies, the shelter made a statement of a very different kind: “The Town of Islip Animal Shelter and Adopt-a-Pet Center is making every effort to return the dog to its owner in a safe and responsible manner,” said Islip Town spokeswoman Patricia Kaloski.

According to the posted rules for reclaiming your dog, the shelter states: “To properly claim one’s dog the owner needs to go to the shelter in person with photo ID and proof of ownership. The owner should also have veterinary information, medical records and family photos.”

No word has yet been given as to exactly what will happen with Lucky.  Remember to check back to www.lifewithdogs.tv for more information.