Sheriff’s Dep and Former Soldier Fight Over Custody of Dog 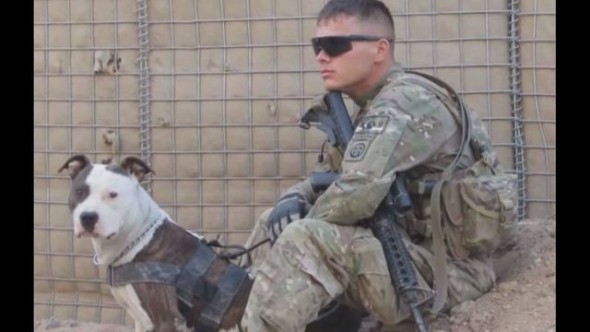 Alex Reimer is an Army veteran, and is in the middle of a fierce custody battle for a dog named Howard that he served with overseas.  Howard’s new human, a sheriff’s deputy, does not want to give up custody of the dog, sparking the fight between the two.

“He saved not only my life, but there were weapons in that van that night that could have been turned on us and there could have been an IED in there,” said Reimer.  “There was an IED in that same van two days later which saved some other people’s lives.”

Reimer, a Minnesota native, now lives in Colorado.  He hasn’t seen Howard since his tour of duty closed out in 2013.  He was searching for Howard, and found that he had been made a part of someone else’s family.

Reimer claims that Howard’s new family cares very little for him.  Reimer says that the dog is constantly tethered to a tree in the yard, and shows almost no interaction with him.  He believes that this is now way to be treating a dog that is an American hero.  Reimer also suffers from PTSD, and thinks having Howard will make things easier.

“I dream about the times that me and Howard had together, the rough times and good times,” said Reimer.  “It’s just… Just tough knowing your best friend is out there tied to a tree and not being taken care of to the best their ability.”

Deon Fuller, Howard’s new human dad says that Reimer’s claims are untrue.  Fuller is a Hoke County Sheriff’s Deputy, and says he Loves Howard very much, and gives him only the best of treatment.

“As of right now I’m saying Howard is my dog and he is home with myself and my family,” Fuller said.