Hayley Miller was facing having to make a decision that no dog parent should ever have to.  She needed to decide if she would have her dog, whom had been shot in the face at close range, put down or possibly saved at a cost far greater than she could personally afford.  That is, until a total stranger told her that he would pay for the dog’s medical bills, changing the situation completely.

The stranger’s name is Brian Bowling, and it was fairly easy to tell from the uniform that he was a Sheriff’s deputy in Maricopa County.  What she didn’t know, was that this was the very officer that rushed her dog to the hospital after discovering him wounded.  Not only did he get her dog to the hospital on time, but he was also going to foot the total bill to save her dog’s life!

According to Deputy Bowling, Miller’s dog Ginger had burrowed under the fence in her yard and into a neighbor’s yard.  This neighbor claims that the dog does it all the time, and this time the psycho opened fire on Ginger.  Deputy Bowling happened to be near the scene when the call come through, and arrived to see Ginger badly bleeding.

“Instead of running away from me or trying to bite me, she ran right up to me and started wagging her tail and tried to get inside the front seat of my patrol car,” said Deputy Bowling.  “I didn’t believe it would survive, given the grievous nature of its injuries, if we had waited for Animal Control to arrive on the scene.  She continued wagging her tail, and ultimately that [gauze] stopped the bleeding long enough to get her to the hospital.  Unfortunately, the lady that had been doing the animal rescue was a single mother and she didn’t have the financial means to pay for the care.  I kind of had to make a decision at that point.  Called my wife.  I thought, as a peace officer, we’re empowered to make decisions that save lives.  We’re empowered to affect our community in a positive way.  And my wife was very supportive.”

Miller is just completely awestruck by Deputy Bowling’s generosity.  He took out his own credit card, and paid over $2,500 without expecting anything in return at all.  And even after all of the, the humble sheriff’s deputy tried to deflect attention away from himself.

Ginger is now resting comfortable at home, and Miller is still in disbelief. 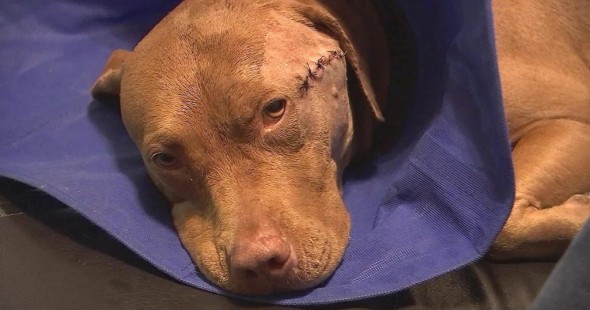