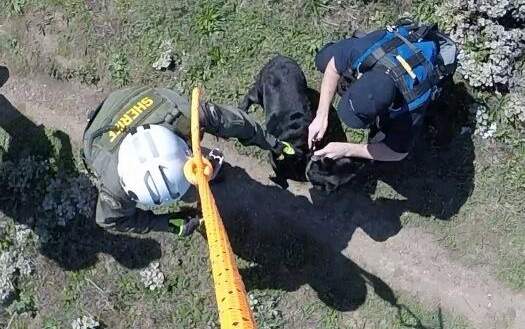 Police in Santa Rosa, California used a helicopter to come to the rescue of a black Lab named Oreo who had fallen down a 90-foot cliff on Saturday. A sheriff’s deputy dangled 100-feet from the helicopter to bring Oreo to safety.

A 911 call came in around 1:45 p.m. on Saturday from Oreo’s owner. The black Lab had fallen over a cliff. Police were worried bystanders might risk their own lives trying to help Oreo so the decision was made to dispatch their helicopter, “Henry-1”, to the scene.

The helicopter found Oreo perched on a 2-foot-by-2-foot ledge about halfway down the cliff. Oreo was stranded with nowhere to go.

The pilot landed the helicopter near the scene and a deputy sheriff was hooked up to a 100-foot line that attached to the helicopter. Using the dog’s harness the deputy was able to secure Oreo and the two were flown to the top of the cliff. According to the sheriff’s office the rescue took only three minutes.

How to Raise a Puppy: Recommendations from a Vet
VIDEO: This hilarious, leaf-loving Lab is the antidote to Mondays.
Cephalexin for Dogs
Best Dog Foods for Miniature Schnauzers
Dave's Pet Food Review
Ear Infections in Dogs
Meloxicam for Your Dog
The Best Dog Food for German Shorthaired Pointers