In March of 2011,Gayle, a volunteer from Agape Animal Rescue, first met the little Shih Tzu named George who, unbeknownst to her, would later become such an integral part of her life.  She found him in the back of a kennel at the Tennessee State Fairgrounds, sitting straight up, quivering and scared.

Gayle and another volunteer, April, had offered to help with the Warren County puppy mill rescue effort and were focused on their morning task, which included cleaning, watering and feeding their assigned kennels. There wasn’t much time to interact with the dogs as they worked, though Gayle noticed right away how empty and frightened George was. At one point, April held him and he stiffened like a board, shaking the entire time that Gayle was cleaning his cage.

In addition, they could see that his eyesight had been affected by the puppy mill neglect, but they couldn’t tell how severely. Someone nearby suggested that he was blind. Gayle’s heart just sank for him because the kennels were draped, allowing very little light into his make-shift temporary space. He likely needed all the light he could get in order to even vaguely see.

Yet when they got out the food bowls, they saw a spark, just a little, beneath all of his sadness. George began to dance around in his kennel and Gayle thought to herself, “He wants to be happy.”

At the puppy mill, George had been used as a breeding dog and had lived his entire life in a rabbit hutch. Poor nutrition and neglect had rotted his teeth, leaving him with only a couple remaining and even those had to eventually be pulled. His gums and ears were infected, he was depressed, dehydrated and had a low thyroid condition.

George’s six to seven years of neglect had also left him with severe eye damage and partial blindness. To make matters worse, matted hair on his face had sealed his eyes shut. There is no telling how long George had lived in darkness.

As a volunteer and foster parent for Agape, Gayle knew that some of the dogs at the fairgrounds might end up in their foster care program once they were released by the court system. Because of the spark that she had seen in George, Gayle gave her director his name as a candidate. Ironically, of the 12 dogs they took into foster care from the grounds, George was selected to be Gayle’s foster dog.

Gayle wasn’t looking for a new dog for her family but, as a foster parent, she actively rehabs the dogs under her care. So, a normal day includes walks, trips to parks and other settings where Gayle’s lab, Simon, and her other foster dogs get lots of socialization and exposure to people and other dogs.

George fell right into this routine as they worked on his physical and emotional rehabilitation and posted him on Agape’s website, waiting for his forever family to come along.

But the right family just didn’t come. Some were interested, but it seemed George’s health issues (mainly the vision problems) caused most families to look over him and choose other adoptable dogs. Gayle’s heart broke for him as applicant after applicant rejected the little, lovable puppy mill Shih Tzu.

Six months and then seven months passed and George grew healthier and stronger. He was becoming so blended into the family and so happy with his life. Gayle had to take a step back and look at the situation: Would it be fair to move him?

One day, Gayle saw the online Animal Rescue Corp video of the actual footage showing George and his fellow puppy mill survivors being rescued from their Warren County, TN captivity. The timing of this was what Gayle would call a “God thing,” as she had been doing her own soul searching about whether or not George should remain with them permanently. 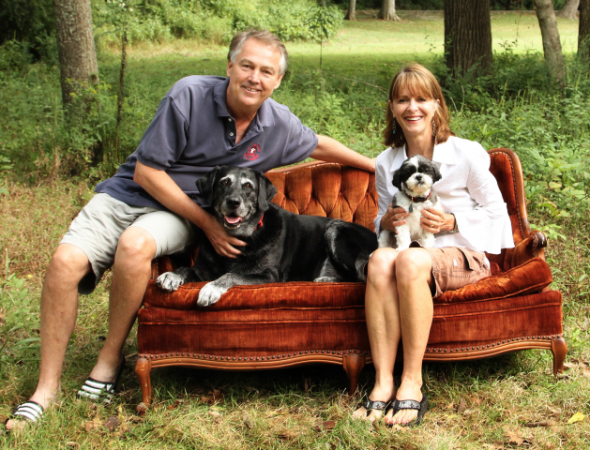 She had seen still shots of the puppy mill bust and worked with and held many of those dogs at the fairgrounds. However, she had never actually seen the video of the puppy mill itself. Tears rolled down her face as she watched, in horror, the footage of where George had come from and the disgusting life the dogs had been forced to live.

She then saw him right after he was saved from his prison, being held in the arms of an ARC rescuer, wagging his tail, and it hit Gayle: He cannot, must not, leave the family!  He was beyond happy in her home, where he loved his routine and believed it to be the best place on the planet.

Gayle wanted to make it official, right then, and so she discussed it with her husband and they adopted George the very next day!

George is now well-adjusted and very, very happy. He thinks all dogs get to walk at the Belle Meade Plantation and meet Civil War reenactors in uniform and ladies in big hoop skirts. They take lots of car rides and go as many places as possible with his best friend and brother, Simon.  George plays with tennis balls and stuffed toys and loves to steal clothes from the laundry basket when no one is looking and then make his own pile, a habit the family affectionately calls, “George doing the laundry.”

He has also become a greeter, something he probably learned from his big, social lab brother. Though socializing him was a slower process as a result of his puppy mill background, his progress has been amazing to watch.  Gayle is very proud of him and speaks highly of him:

“His journey from survivor to the confident, social shih tzu that he is today has simply been a blessing for me to be a small part of. Working with George has taught me a lot about trust and love and I am so thankful I saw his tiny spark in an otherwise empty face months ago. I love him and we are thrilled he has become a forever member of our family!”

Agape Animal Rescue is a 501(c)3, nonprofit animal rescue organization located in Nashville, Tennessee. They are dedicated to finding forever homes for abandoned and displaced dogs, while educating the public to be more responsible pet owners. They do this by providing loving, emotionally stable, nurturing foster care while they wait for their forever families. As part of the foster care, dogs also receive obedience training, including leash manners and house manners, through the Foster Care Training Program.