A mother and son from New Mexico were arrested Sunday after a concerned citizen reported a horrifying picture the two took of their puppy. The picture shows the mother holding up a Ziploc freezer bag with the puppy inside it.

Mary Snell, 44, and her son James Engel, 21, of Albuquerque, New Mexico posted a picture of their 8-week-old Chihuahua puppy Baby on Facebook. The picture shows Snell holding up an open Ziploc freezer bag with Baby inside.

Someone who saw the Facebook post contacted the police. Both Snell and Engel were arrested and are facing felony animal cruelty charges for the photo. Although the bag was open, the way the puppy was positioned she could have easily suffocated. 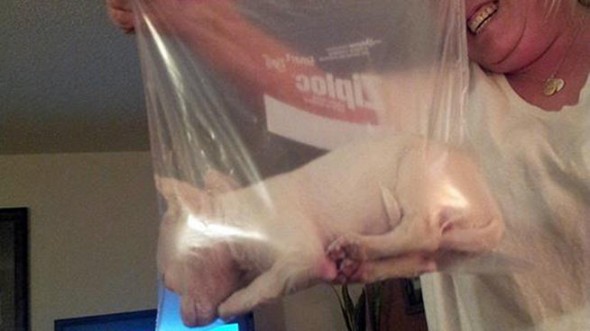 “When we talked to Animal Care Services, it’s basically the same thing as an infant,” said Sgt. Aaron Williamson. “The young puppy doesn’t have the ability to move its head to get to a fresh supply of oxygen. The way it was positioned in the bag, they said it would’ve only taken a few seconds to cause the puppy to suffocate.”

Snell was allegedly trying to take a picture of Baby to show how small she was. When Baby wouldn’t hold still Snell used the freezer bag.

The puppy is doing fine despite the ordeal. She has been checked out of Animal Care Services and is being cared for by another family member.