A California man is seeking help from the public after a dog that helps keep watch over his infant daughter was stolen from his back yard.
[dcs_head top=”0″ color=”#666666″] [/dcs_head] 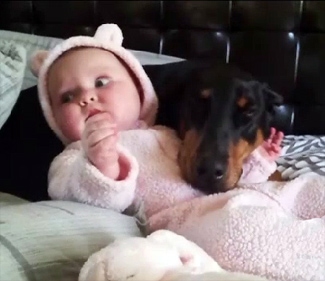 She was found in a Lakeside home after police received a tip that Brian Margarita’s bitter ex-girlfriend had asked a friend of hers to take the dog and hide it out of spite.

“When the story first broke, I had three or four friends tell me that they thought maybe that’s what could have happened, and I thought, no way, no way could anybody do that,” he said.

Police have opened an investigation and have indicated that charges are possible. Margarita is less concerned with formalities and is overcome with relief. He said the outpouring of support from dog lovers near and far was heartening.

“I had a stranger in Orange County PayPal me $1,000 to double the reward,” he said. “I think this is what Christmas is about. There is nothing I want on my wish list — this was it.”

-end update
[dcs_head top=”0″ color=”#666666″] [/dcs_head] Brian Margarita says his Doberman Pinscher Bella, and his epileptic 9-month-old daughter Reese have formed an unbreakable bond: the certified therapy dog monitors Reese and alerts Margarita when she is on the verge of a seizure.

“Obviously there’s baby monitors in here that I can hear the baby, but I don’t feel like I could react as fast as the dog is sensing things before they happen,” Margarita said.

If Bella detects an oncoming seizure, she barks until Margarita arrives to check on Reese. Margarita says both he and Reese have been safer and happier with Bella in their lives, and he is still shocked by the theft of their companion.

“It’s almost on the borderline of stealing someone’s kid,” he said. “How do you have any conscience about taking something that somebody has a bond with?”

Margarita is relying on Facebook groups and rescue organizations to help spread the word about Bella’s disappearance, and he has offered a $1,000 reward for her return. If you have any information regarding Bella’s whereabouts, please contact [email protected]