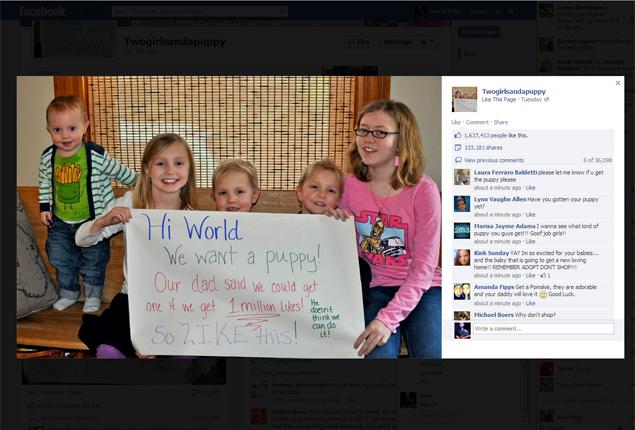 Twelve-year-old Cadence and nine-year-old Emerson Cordell are two very determined young girls.  When a challenge is laid before them, especially by dad Ryan, they gladly face it head-on.  The girls really wanted a puppy, but their dad said only if they could get one million likes on Facebook.  He did not think they could do it, but he was proven wrong in just 13 hours.

The Massachusetts family lost their last dog to cancer in August.  The kids were ready to love a new dog, but Ryan and his wife Evie wanted to wait a little longer.

“They were joking with my husband and said, ‘What if we got 1 million likes?’ and my husband was like ‘Sure,’” said Evie.

Emerson and Cadence got to work on the sign, and posed with their three little brothers while mom took the photo.  Around midnight that night, Evie and Ryan saw that the photo had reached their goal of one million likes.  The children were delighted to hear the good news the next morning.

“They didn’t quite believe it had happened so quickly.  My youngest daughter thinks every million we reach, we should get another puppy, which is not going to happen,” Evie said with a smile.

The family is planning to save Labrador or golden retriever puppy from a shelter.