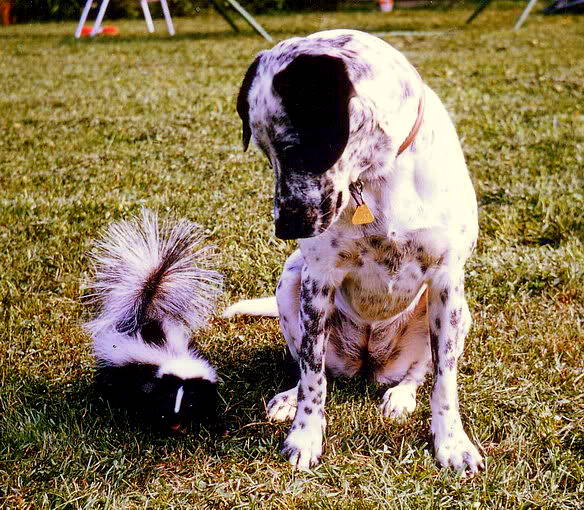 If your dog has never been skunked, consider yourself lucky.  Not only is the smell horrendous, but it can also be long-lasting.  Six months long-lasting.  And this is the time of year when it seems most pets get sprayed.

Several summers ago, I let my dogs Orion and Muscles out around midnight or so.  I’m a night person, and was baking up some garlic bread.  My yard was fenced-in and my dogs weren’t runners.  I could keep an eye out for them, and when they were ready, they’d come up to the door to be let in. 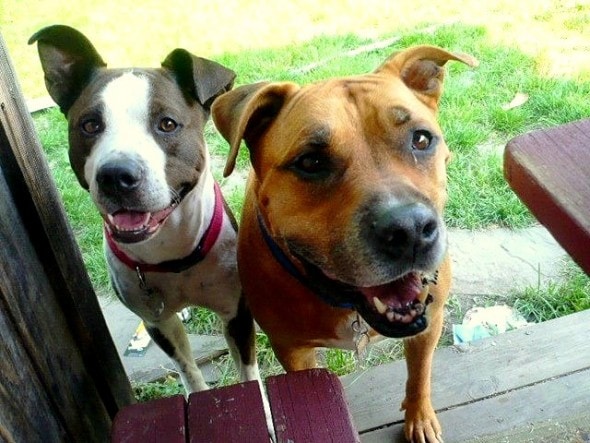 I let them in and was immediately hit by that unmistakable stench – they’d been skunked.  One of them or both ran upstairs and into my mom’s room.  She was woken up by their commotion and stinky perfume, and came downstairs pretty angry.

If you’ve ever smelled skunk spray up close, it smells like a cross between burnt garlic and burnt rubber.  Needless to say, my appetite for anything garlicky (bye-bye garlic bread) was quashed for a number of years. 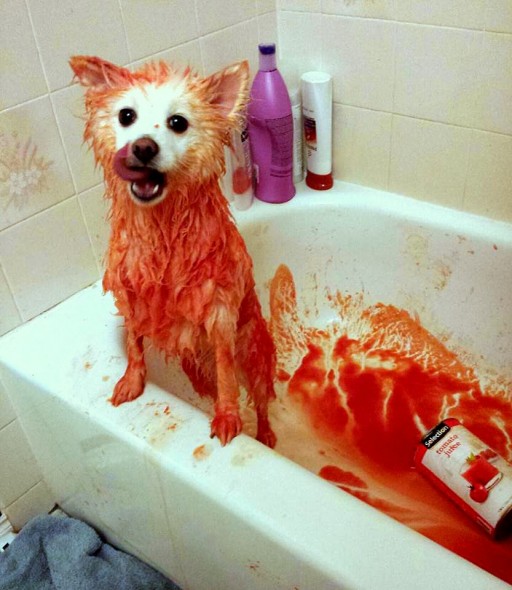 I didn’t know exactly how to deskunk the boys.  Everyone’s heard about tomato juice, but does it really work?  A quick Google search confirmed that it does not.  What it does is cover up the smell, and turn white fur orange.

Skunk spray is an oil, and the first thing you’ll want to do is make sure you don’t spread it around.  A sniff test will easily tell you just where your dog has been sprayed.  Use paper towels to blot as much of the oil up as possible before spreading it around with liquid.

A number of sites showed that the best way to get rid of the odor is to mix 1 teaspoon of dish soap (an oil-buster) or laundry detergent with ¼ cup of baking soda and 1 quart of peroxide.  Do not store the mixture for later use, as this combination is combustible.

Apply liberally where the oil is most concentrated, then get the rest of the coat.  Rinse and Repeat.  Repeat.  Repeat.  Then repeat again, if necessary.  This method has been effectively confirmed by Mythbusters, with all other remedies (aside from a commercial (and probably expensive) skunk deodorizer) being busted.

When my dogs were skunked, the only open store nearby was Walgreens.  We underestimated how bad the damage was, and had to make two trips for more peroxide.  We also didn’t know to blot the oil off, so initially we probably made it worse, which is why we had to give multiple baths.

Hose-washing dogs in the front yard in the middle of the night when it’s a chilly 50 or 55 degrees is not fun.  It’s even less fun when you realize that not only is the oil all over their fur, but it’s also up the nostrils of one of your dogs.  Poor Muscles caught the blast right in the face, and stank for the next six months. 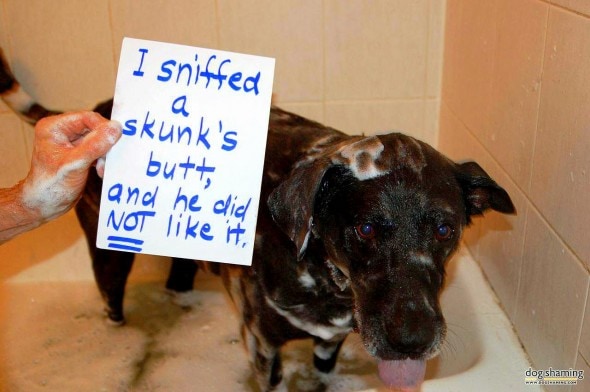 Sadly, this did not stop him from getting sprayed again the next summer.  Skunks are really hesitant to spray, because it takes about 10 days to regenerate 5 or 6 sprays worth.  They go through an elaborate warning ritual, including foot-stamping, hissing, and (handstand) posturing.

Dogs are pretty oblivious to these signals, and like skunks, don’t have the best vision – especially at night.  An intruder is an intruder, and needs to be dealt with.  After the second annual spraying, I tried a bit of classical conditioning on my dogs.  I played a video of a skunk making its warning noises, and then banged two pans together to scare them.

I know it sounds mean, but if they associated the noise a skunk makes with something they don’t like (because the spray and multiple cold baths weren’t punishment enough), maybe they’d rethink their decisions to be such badass yard-defenders.  I don’t know if it worked, but they never got sprayed again.

Skunks are crepuscular animals, meaning they are most active at dawn and dusk.  They are dormant for much of the winter, and though they are around all summer, it seems that (depending on where you live) they do their worst in August and September. 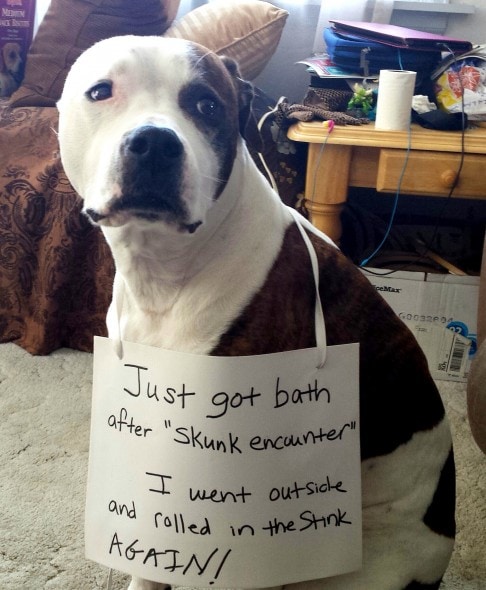 So please be extra cautious when letting your dogs out.  Do a quick inspection of your yard (and block up any egress points for unwanted visitors) before letting dogs out, or walk them around on a leash. 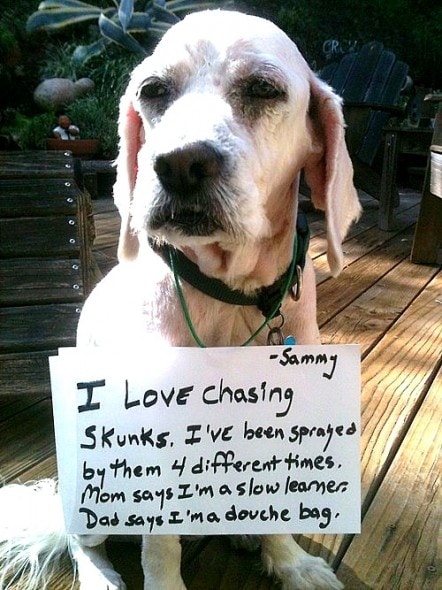