We all know that mourning the loss of a friend is difficult, and for us animal lovers, when our four-legged companions go over the rainbow bridge, the pain is unbearable. Now imagine how our pets feel when their canine friends pass away, and how traumatic this is when it happens in front of them.

This past February, a small black dog from Nuevo León, México, witnessed how his best friend got run over by an automobile. The small pet grieved for over 40 minutes and constantly tried to revive his best friend. Sadly, no one did anything to help the injured pet and the black dog couldn’t save his friend. 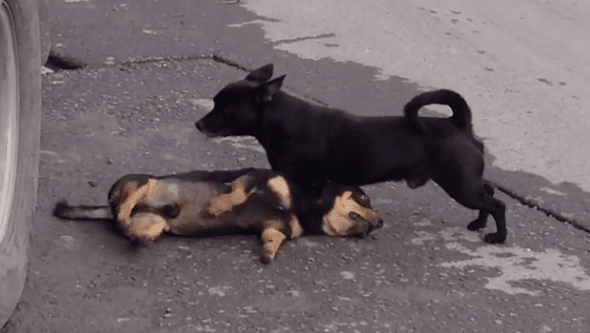 Juan Raul Quiñones was walking near the accident scene and saw how the black dog barked and tried to help the hurt dog. He recorded the sad scene with his cell phone.

“I didn’t know what to do,” said Quiñones. “I had mixed emotions, I felt sad and powerless. I spent 40 minutes there and saw how 15 different people walked by, ignoring what was going on.”

The man uploaded the video to YouTube and many have criticized him saying he too did nothing to help the pets.

Quiñones said that he tried to take the survivor home, but the canine growled at him and refuse to come home.

After experiencing such sad incident, Quiñones said he now has no doubt in his mind that all animals feel pain as much as humans do. He said his view on pets has forever been changed.

A few days after the video was uploaded to the social media site, a message was added to the video description. It reads:
“The black dog was found! He belongs to a neighbor.”

Even though we are sad that no one helped the injured pet, and the only person interested on what was going on did nothing more than record the scene, it gives us peace to know that the grieving dog does have a home and is safe.