How many people report animal abuse when they see it? A small percentage do, and the sad reality is that the majority of people turn a blind eye to abuse. Today, nine abused dogs from Pico Rivera, California, have been rescued thanks to a woman who brought to light the abuse they were living in.

When Janette Gonzalez received a photo from a friend showing four emaciated dogs curled up together, she knew she had to do something to help them. The picture showed a malnourished mom and her three pups lying in the backyard of a Coffman Pico Road home. 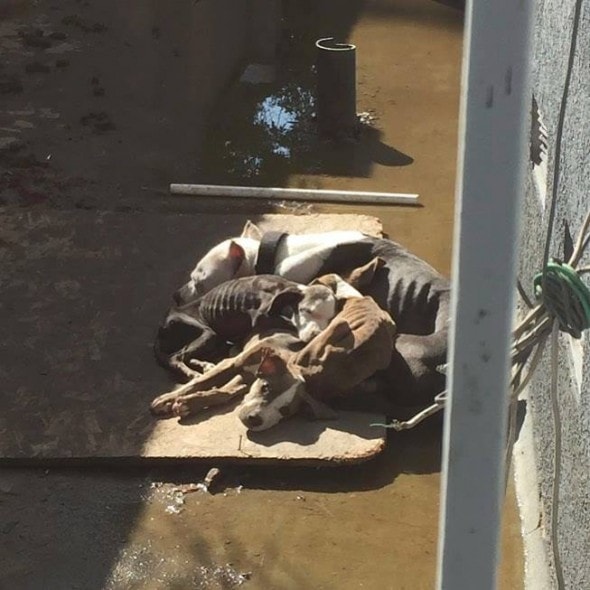 On Oct. 6, 2015, Gonzales posted the photo on Facebook and Instagram and thanks to the power of social media the image went viral. All those shares incited the attention of authorities and soon enough the dogs were rescued from the hell they used to know as home.

“I had already contacted the shelter, made sure they were getting taken out of the premises,” Gonzalez told ABC 7 News. “But I think it just needed more than that because sometimes even shelters don’t do the best of work; they do what they can.”

The Southeast Area Animal Control Authority showed up at the property and spoke to the home and pets’ owner. Aside from the four emaciated dogs from the picture, rescuers discovered five more dogs inside the home. All nine dogs were removed from the premises and an animal abuse investigation got started.

The health status of the other five dogs is unknown at this time, but the good news is that all dogs are now with authorities and receiving proper care.

Neighbors told local news the community is an animal loving community and they couldn’t believe these dogs were being abused and neglected in their own backyards.

It is important to understand that pets cannot speak for themselves. As pet owners need to look out for our pets’ welfare. If you see or suspect an animal is getting abuse, report it to authorities.