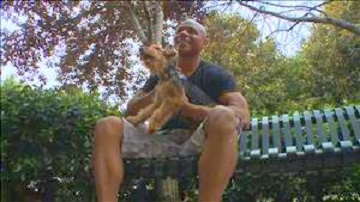 Brandon Patterson was serving in Iraq when he got the call no dog owner wants to receive: his precious pup was missing. Alfaba had discovered a gap in the dogsitter’s fence and had wriggled out.

Patterson felt completely helpless, being so far from the situation going on in Georgia. But he asked friends to put up fliers and post on Facebook. Despite their efforts, there was no sign of Alfaba.

“It’s been very difficult just for closure,” Patterson explained. “Just not knowing where she was at, if she was still alive?”

But he refused to give up. He never stopped looking for her, and always held out hope that someday she would return. He couldn’t bring himself to adopt another dog.

“I think that I wanted to wait until I kind of have a peace about this and I never really did,” he said.

After a year and a half, Alfaba was finally found, but no one knew who she was or who she belonged to. She was one of the many animals Cobb County Animal Control rescued from an animal hoarder. There were dozens of dogs crammed in cages, as well as cats and birds.

“The wire cages (were) stacked double high, very dimly lit. The shades were pulled down so no one could see in,” said Judy Price, a volunteer with Atlanta Pet Rescue and Adoption. “Cats (were) perched on any surface imaginable. The smell of old urine was almost caustic.”

The shelter couldn’t house that many animals, so many needed homes as soon as possible. Price took three of the dogs in, and asked Erika Dillingham for help finding the right home for Alfaba. Dillingham had experience with other Welsh terriers, and could probably make a good match. 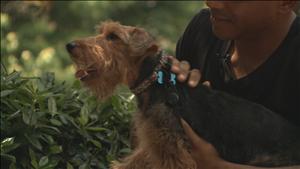 “Her back is black fur, but it was just dense with dirt and grime. You could tell she hadn’t been brushed in a very very long time,” Price said.

Dillingham took Alfaba to a vet. She could feel a microchip in her shoulder, but the vet said she didn’t have one. Alfaba was taken to another vet who confirmed that she was microchipped, but the information didn’t lead to Patterson. She tried to track down the microchip’s manufacturer and the purchase point.

“It took a lot of internet searching and a lot of phone calling,” Dillingham said.

She finally got a number for Patterson, but it was disconnected. There seemed to be no way to find Alfaba’s owner. A home in Montana had been found for her, and she was about to be sent there when the microchip company called with another number. This time, it was Patterson’s.

“She started bouncing in the air and her tail was going a million miles a minute,” Dillingham said.

Despite being gone so long, Alfaba is still the same ol’ girl.

“Whenever I got out of the shower she would always lick my legs. She continues to do that,” Patterson said.

Dillingham believes Alfaba’s adventure is a good reminder for all owners to have their pets microchipped, and to keep their contact information current. It is difficult to remember in the chaotic moving process, but worthwhile.