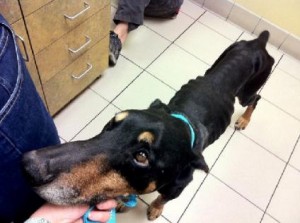 Stabbed and abandoned on a barren Nevada mountain top, an amazing Doberman named Sonny is starting to recover after dropping to half of his former weight.

John and Pat Getter, founders of nonprofit Doberman Rescue of Nevada, say that Sonny, named for the mountain he was stranded on, should not be alive. “He was emaciated when rescued and probably wouldn’t have lasted even a few more days,” John Getter said in an interview with the Statesman Journal.

Everything about the dog and his history is a mystery. He was found huddled on the 4,500 foot high peak of Sunrise Mountain near Las Vegas Nevada, locked in a cell phone tower fence, emaciated and suffering from a gash in his neck. He was discovered by chance.

“A hiker actually came across him and called the cell tower company, who called us,” Getter said. “He was rescued and then taken to Lied Animal Shelter, and after a few days, we were asked to take over.” 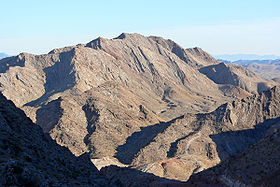 When Sonny was rescued he weighed only 35 pounds. “That is unheard of,” Pat Getter said. “A full-grown male Doberman should weigh at least twice that.”

A large cut 2 inches long and more than an inch deep across the front of Sonny’s throat was inflicted intentionally, according to veterinarians who examined the dog. “It looks like someone cut his throat,” John Getter said. “It’s not the type of injury he could have just had happen to him accidentally. That makes all this even worse. Somebody did this to him intentionally, and we may never know who or why.”

Despite his anger over the abuse, Getter prefers to focus on the miracle that is Sonny’s survival story. And while adoption applications are already pouring in, he says potential adopters will be carefully screened.

“We want to find these dogs a forever home, not a forever backyard,” he said. “When it comes to Dobermans, the love you get is so much more than you could ever return. But we are looking for adoptive families who are willing to try.”