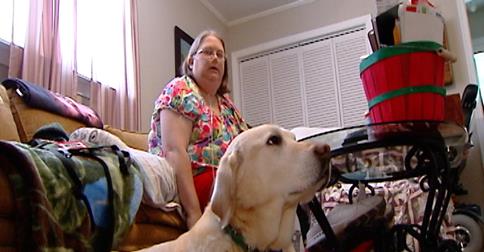 In Easley, South Carolina a woman said she had been denied entry and service at a local restaurant because she had a dog with her. Her dog however was a very important, specially trained service dog meant to detect severe seizures, and needs to be with her at all times. Now the restaurant is issuing an apology to the woman for the miscommunication.

Julie Hayes in on four different medications, all in the effort to control seizures that she still ends up getting at least twice a day. Drizzle, can detect these seizures up to 15 minutes before they happen.

When Drizzle and Hayes had tried to get into a restaurant, with his vest on, and proper paper work ready, they were still denied. The manager informed Hayes that there wasn’t enough room, and told her he could seat her and the dog outside.

“I told him I couldn’t do that because I was sick and I had an allergic disease and had to eat indoors and he said ‘You can’t do that. That dog is not coming in my restaurant,’” Hayes said.

With no other choice, Hayes and Drizzle left without being served.
The manager of the restaurant wouldn’t speak face to face with the news, but did say he was sorry. He also said he wasn’t completely familiar with the rules surrounding service dogs. According to him, Hayes and Drizzle are welcome back any time they wish.

“This isn’t the first time this has happened to me,” Hayes said. “When you get a dog like this, it feels like you’re teaching the world.”