On February 13, 2014, two small, female dogs were found inside a dumpster behind the Bread of Life food pantry in south Wichita, Kansas. The discovery was made by volunteer worker Dolly Herbert, who upon opening the bin and finding a scared, brown, Dachshund mixed dog, called authorities.

The second dog, a black miniature Pinscher, was discovered by police officers on the other end of the garbage container. 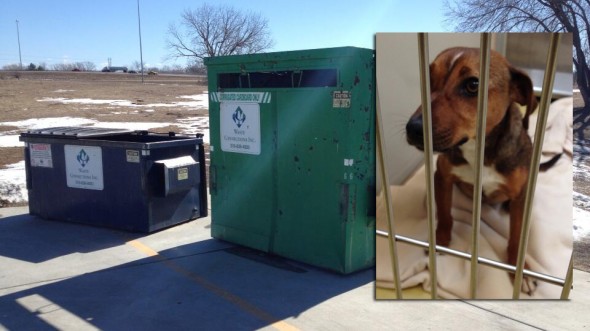 Both dogs were rescued and taken to Wichita Animal Shelter and a veterinarian examined the pets. The canines were dehydrated and under weight, but with some TLC they are expected to make a full recovery.

On Feb. 20, 2014, the small dogs now named Boogie and Bitsy, were released to K-9 Karma Animal Advocates and were placed in foster homes for rehabilitation and socialization.

Curt Farrington of K-9 Karma Animal Advocates told The Wichita Eagle that Boogie is believed to be 2 years old and is very friendly. Three-year-old Bitsy on the other hand, is very timid and at first was nipping at people. Now she is not aggressive towards the people who have cared for her.

Authorities don’t have any leads on who could have dumped the dogs in the trash, but police, rescue workers, and volunteers from the food pantry are glad the dogs were found and rescued before the trash compactor collected them.

If anyone is interested in adopting the dogs, please e-mail [email protected] or fill out an application at www.ksdogrescue.com.