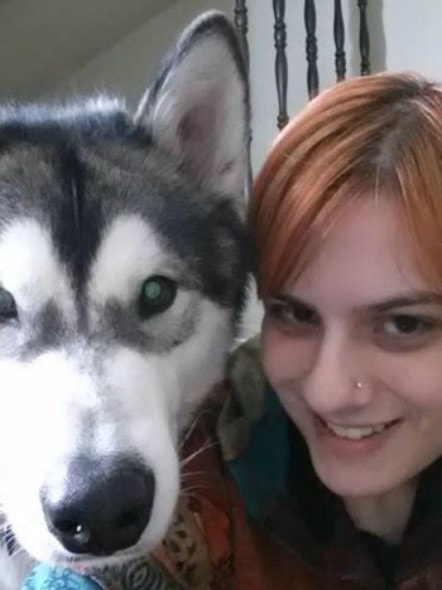 The national coffee house chain will be offering a public apology to Amy Kaplan of Brighton, New York.  This past Sunday, after a long walk with her dog Zero, she stopped into one of their locations for a coffee, but was denied access because of her service dog.

Amy managed to catch part of the interaction on video.  You can clearly hear her say, “Are you denying me access because of my service dog?”

You can hear the employee say, “No, I’m not.  I’m telling you that you cannot come in with your service dog.”

Amy suffers from traumatic brain injuries she sustained during an accident where the ambulance she was working on was hit by a bus.  She also suffers from a severe form of bipolar disorder.

Zero is there to help her out with various daily tasks that because of the brain injuries, can make life very difficult.  Everything from coping with memory issues such as where she left her car, all the way to dealing with the anxiety brought on by the bipolar disorder.  Zero is there with her and for her, every day.

The Americans with Disabilities Act requires businesses to allow people assisted by service dogs entry to their establishment.  The federal government even goes so far as to say that the only things that should be asked are if the dog is a service animal required due to a disability, and what tasks it is trained to perform for the person.  Also, individuals with service dogs are not at all required to give any forms or documentation proving that the dog is in fact a service animal.

Unfortunately, this is not the first time Amy has faced this issue around.  Zero does not wear a service dog vest, nor does he have identification on his tags saying he is a service animal.  She has been asked to leave local businesses before because of Zero.

“This is part of daily life when you’re a service dog handler,” said Amy.  “Everywhere you go, nobody wants to let you in.”

“It’s unfortunate that happened,” said Laurel Harper.  Harper is a spokesperson for Starbucks and said, “Ms. Kaplan did have an experience that’s absolutely inconsistent with our values and our service animal policy.”