When Rem was found, he was emaciated, blinded, suffering from demodectic mange.  He was an hour from being euthanized when he was pulled and taken to Dr. Matt Carriker’s office.  Today he hardly looks like the same puppy!

Dr. Matt of the Vet Ranch in Texas received a text about Rem, and came in on his day off to treat him.  The poor little stinker was in bad shape.  At the pound, he had been treated for parasites, and likely had Ivermectin toxicity, which is known to cause blindness. 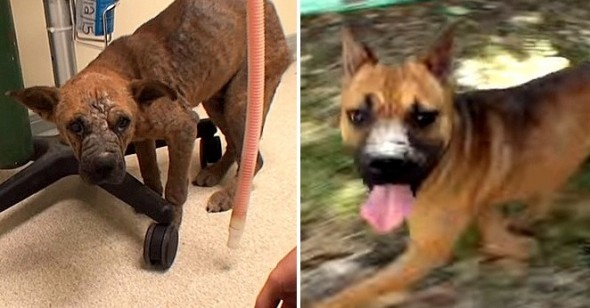 He was given a bath, and after a couple of days, his vision began to return.  Though Rem was still terrified, Dr. Matt was able to get a few tail wags out of him.  The doctor even has his own special method of healing, and it worked like a charm.

The wiggly little smooch machine is now ready for a home.  If you’d like to adopt him or any of Vet Ranch’s other rescues, or if you would like to donate so they can continue saving dogs like Rem, click here.