Stray dog Ace was discovered on November 4th, huddling in the corner of an Ace Hardware store in Detroit. The young pit bull was emaciated and terrified. He was eventually remanded to the custody of Detroit Animal Control. 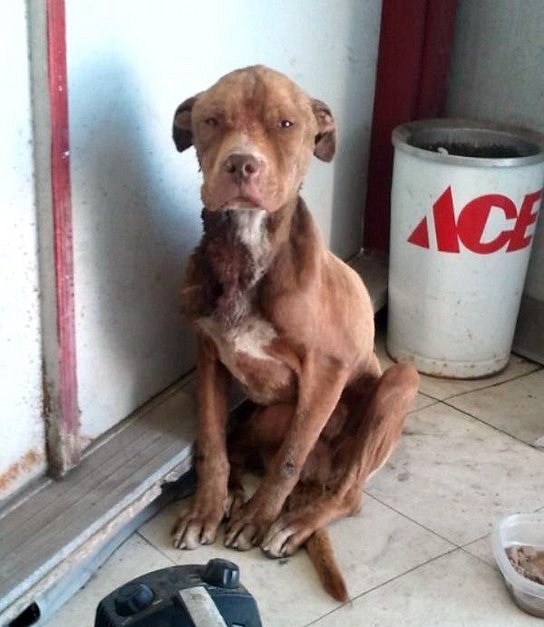 A city ordinance allows animal control to put down any unlicensed animal within four days of being captured if an owner does not come forward, and those who caught wind of Ace’s plight expressed immediate concern for his safety. A Facebook page was started by supporters and has been gaining fans rapidly. All have been waiting and watching as a nebulous, stressful series of events have played out.

No reporters have been allowed to photograph the dog. Three people attempted to claim Ace today, and one woman who arrived at the shelter to claim him said that the dog they showed her is not the same Ace that she saw on TV. Tensions surrounding the dog and his future reached an all-time high earlier today when a spokesperson for Detroit Animal control said nothing could be done to save Ace.

To make matters worse, Ace was scheduled to be put down Friday, and many had questioned whether he had already been euthanized. That would appear not to be the case, because according to 7 Action News this evening Detroit Dog Rescue has announced that a judge has granted a stay on euthanasia for any pit bill resembling “Ace” until November 16th when a new hearing to decide Ace’s fate will be held.

“It would be devastating to the good will of this City for the Mayor’s office to allow ACE to die when a reputable, state-approved rescue agency has told us that they will rehabilitate the dog and determine if it’s adoptable. My concern is the liability to the City, but this can be remedied by drafting a legal document relieving the City of its liability.

Another option is for the Mayor to temporarily suspend the City’s policy. My office is looking at how we can amend the City’s ordinance to allow dogs like ACE to live through a shelter-to-shelter exchange if we can have our liability removed.

The bigger picture is that this is not a battle we should be fighting right now given the more critical priorities we are faced with. In the meantime, the Mayor’s office should do whatever is necessary to keep ACE alive.”

Several organizations had volunteered to foster Ace while a home is found, but Detroit Animal Control has not been willing to turn the dog over.

9 thoughts on “Stay of Euthanasia Could Save Ace”