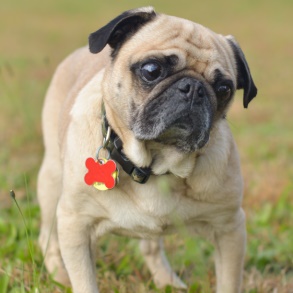 After a rough start, a 4 year old pug named Steve has a new lease on life, thanks to the local rescue organization Athens Canine Rescue. Steve was first picked up as a stray and taken to a local animal control in Monroe, Georgia back in May.

Athens Canine Rescue happened to stop by the shelter and fell in love with his cute, wrinkly face. They found out that he had no adoption applications and so the volunteers began arranging his rescue.

As they spent some time with Steve, it became apparent that he had some health problems. He seemed to have serious issues with the back half of his body. At first, it seemed like he just had a bit of a “swagger” in his walk. However, his rescuers soon realized that it was much more than that.

An X-ray revealed that Steve had bilateral hip dysplasia, a painful experience to say the least! Bilateral hip dysplasia is expensive and the recovery takes months, but Athens Canine Rescue felt an obligation to help this young, loving pug who had been abandoned in his time of need.

A dog with a long list of medical needs has slim chances at a shelter, so this group was Steve’s best chance at a new life. He was rescued from animal control and placed into a new foster home with an already spoiled pug to show him what the good life is all about. The volunteer group set up an online fundraiser and, thanks to the outpouring support of animal lovers, they were able to raise enough funds for Steve’s care.

Steve visited veterinary specialists, who all agreed that nothing needs to be done about his hips at this point – it seems that all the damage has been done and surgery cannot correct it. It is likely he will need more care in the future but he currently takes a low dose pain medication and seems to be living a pain-free life.

It was also discovered that the little guy is blind in his right eye, but you would never know it from the way he acts! Steve has been a tough guy from the beginning and his happy go lucky attitude is inspiring, especially after everything he has been through!

Now that he has fully recovered from his ordeal, Steve is available for adoption to a loving family. He is already housebroken and crate trained, though for Steve, the crate is totally unnecessary. He has perfect house manners and never chews on anything – he prefers to nap.

Although he lives with another pug now, Steve isn’t a super active dog and if he has a canine companion, he would prefer one who likes to relax like him instead of play all the time. He really just loves to snuggle with his human and spend as much time as possible in their lap.  Steve likes to fall asleep next to his humans, so his new family will have to be okay with a little bit of snoring.

As with any pug, maintaining Steve’s weight is crucial to maintaining his good health. His bad hips make it especially important that he does not become overweight, and munching on carrots is his favorite way to stay slim and trim! If you are interested in adopting Steve, please read more about him and fill out an online application.

Athens Canine Rescue is a non-profit organization in Athens, Georgia made up of foster homes that provide dogs with temporary housing until they are adopted. These foster homes ensure the dogs rescued from shelters receive love, attention, and some social guidance as they wait patiently for their forever homes. Please visit our website or Facebook page for more information.