Last month, Gunny, a six-year-old English bulldog from San Bernandino, Calif., disappeared from his backyard, his owner searched for the dog but couldn’t find him and they were surprised when they saw pictures of the dog up for sale on Craigslist. The sellers wanted $2,500 for the pet but what was more shocking was finding out who the sellers where, Gunny’s own neighbors. 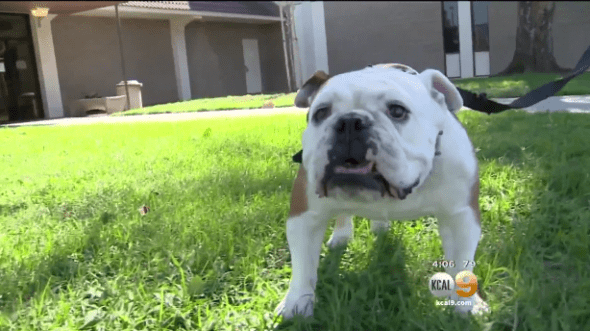 According to CBS Los Angeles, Gunny’s whereabouts where learned when a friend of the pet owner spotted the pictures online. With the help of police deputies, the friend posed as an interested party and contacted the sellers.

The thief merchants were a couple who lived near Gunny’s house. After meeting the prospective buyer who identified the dog, police moved in and the dog nappers were arrested and charged with felony possession of stolen property.

Gunny is now back home with his rightful owner, who says she will not be letting Gunny out of her sight.