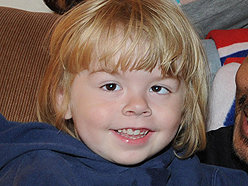 Bailey, a chihuahua-Pomeranian mix, was stolen from in front of a supermarket. Her devastated family has been pleading for her return, and their wishes were answered Today.

The Peterborough Humane Society received an anonymous tip that Bailey was tied to a tree near their offices. They found her and notified the Smith family shortly thereafter.

“They called and said they thought they had Bailey and I pretty much said, ‘We’ll be right there,” Leslie Smith said.

Smith is the mother a special-needs four year old child, Lukas. Bailey was a gift to Lukas  after Lukas’s father died in a car crash two weeks before Christmas in 2010.

Bailey was stolen Thursday morning when she was tied to a bicycle rack at a grocery store for less than ten minutes by Smith’s boyfriend, Sam Roy. Lukas was utterly devastated by the loss of his pet, Smith said.

“We can’t thank everyone enough for helping Lukas get his dog back,” she said. “We’re so happy to have him back. We are complete once again. Lukas doesn’t know what to think about it other than puppy was gone and now puppy is back.”

The family received many calls over the weekend from concerned animal lovers after they read the story of Bailey’s disappearance.

“One call was from a gentleman and his wife offering to either pay the reward money or chip in to get Lukas another dog,” Smith said.