When a home security system when off and Deputies from the Santa Clara County Sheriff’s Office were dispatched to the scene of the call, they were forced to make their most adorable arrest ever!  They arrived at the home to find that two, adorable, white, fluffy puppies were the culprits!  The officers shared a “crime scene” photo of the event with social media outlets, and it was even featured on The Dodo! 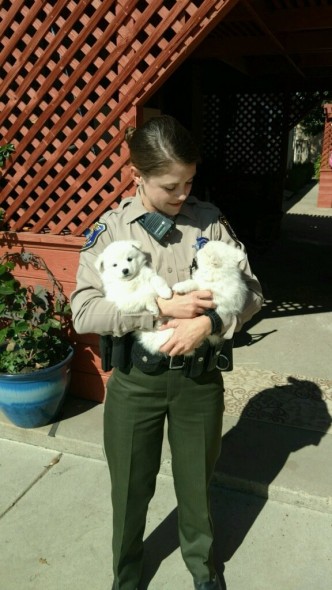 According to officers, “(It’s) Unknown if they were the actual culprits of the false alarm, but we have our suspicions.  But they are adorable nonetheless.”

Not surprisingly, this isn’t exactly the first call they’ve had to cover for someone’s dog setting off the alarm in someone’s home.  It happens quite a bit, however the photo opportunities aren’t usualy as good.  In fact, officers were call out to a home in California recently because a Great Dane set off a home security alarm.  He was let off with a warning as well!