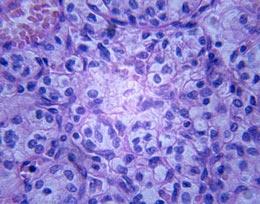 A curious contagious cancer, found in dogs, wolves and coyotes, can repair its own genetic mutations by adopting genes from its host animal, according to a new study in the journal Science.

Scientists at Imperial College London have uncovered an unusual process that helps the cancer survive by stealing tiny DNA-containing ‘powerhouses’ (known as mitochondria) from the cells of the infected animal, to incorporate as its own. They say this may be because genes in the tumour’s own mitochondria have a tendency to mutate and degenerate. The results are surprising because mitochondria and their genes are usually only passed from a mother to her offspring.

The findings may have broad implications for halting the spread of similar diseases in other animals and for understanding cancer progression across species. Mitochondrial transfer between genetically distinct cells has previously been observed in the laboratory, but this is the first time it has been demonstrated to occur in nature.

Canine Transmissible Venereal Tumour or CTVT is a very unusual form of cancer that is typically transmitted by mating, though it can also be spread by licking, biting or sniffing tumour-affected areas. The cancer cells themselves move directly from dog to dog, acting like a parasite on each infected animal. Found in most canine breeds throughout the world, the scientists think CTVT is very similar to the transmissible but more fatal cancer seen in the endangered Tasmanian devils of Australia.

Dr Clare Rebbeck, formerly a PhD student on the project at Imperial College London, now working at Cold Spring Harbor Laboratory in the USA, originally set out to explore how the cancers found in different parts of the world were related to one another, using computer analysis of DNA samples. However, her analysis showed that the pattern of relationships for the mitochondrial genes was different to that of the nuclear DNA. In cases the cancers were even more closely related to some dogs than to other some cancers. This finding indicated that the cancers sometimes acquired mitochondria from their hosts.

Professor Austin Burt from the Department of Life Sciences at Imperial College London, who led the research, said: “Our study has revealed that this type of cancer works in a really unexpected way. It raises some really important questions about the progression of other cancers, such as how they repair their own DNA.”

The researchers believe that the cancer does not take up new mitochondria with every new host, rather that this functions as an occasional repair mechanism to replace faulty mitochondria. A naturally high rate of genetic mutation in cancers regularly leads to non-functional genes in the CTVT mitochondria, which causes them to lose productivity.

In an earlier study, Imperial’s scientists estimated that the earliest CTVT tumour originated from an ancient dog or wolf approximately 10,000 years ago, perhaps when dogs were first domesticated through intensive inbreeding of the more social wolves. Today’s results suggest that over this time, the cancer must have evolved the unusual ability to capture mitochondria from its host animal.

The scientists hope their work can be built upon by medical researchers to advance our knowledge of cancer progression in humans and other animal species.