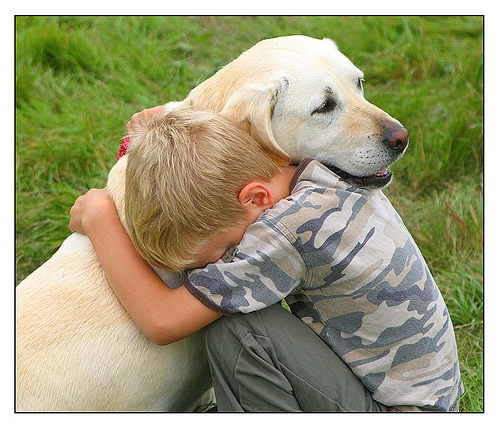 According to a recent study by Deborah Custance and Jennifer Mayer of Goldsmiths College in London, dogs are good for us in more ways than we might have imagined. Not only do they have a desire to please – they also want us to be happy. According to the study, published in the in the journal of Animal Cognition:

Dogs oriented toward their owner or a stranger more often when the person was pretending to cry than when they were talking or humming. Observers, unaware of experimental hypotheses and the condition under which dogs were responding, more often categorized dogs’ approaches as submissive as opposed to alert, playful or calm during the crying condition.

It has been found that when typically-developing human infants are faced with suddenly crying individuals, they will often hug, pat, make appropriate verbal utterances (e.g., “there, there”, “it’s okay”), offer toys, and sometimes recruit assistance. The behavior of dogs under similar circumstances is harder to interpret. Dogs can whine, nuzzle, lick, lay their head in the person’s lap or fetch toys.

Yet, such behavior could be an expression of contagious distress and egoistic comfort-seeking rather than empathically motivated comfort-offering. Alternatively, such behavior could be motivated by curiosity. Hence, the primary challenge in investigating possible empathy in dogs is devising an experimental procedure that can elucidate the distinction between curiosity, egoistic attention- or comfort-seeking and expressions of genuine empathic concern,” says the study.