We avoid tabloids and garbage gossip news for obvious reasons, but this is just too good to pass up.

According to Anorak News: 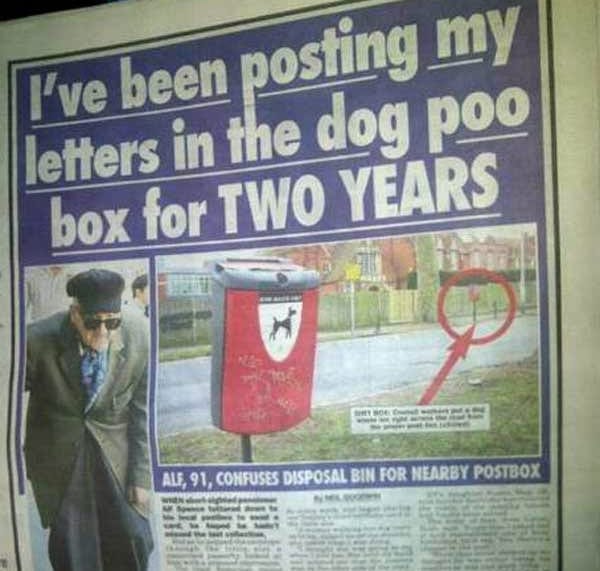 ALF Spence, 91, of Bedale, North Yorkshire, has been posting his letters in the dog poo box in error for two years. Says he:

“A woman walking her dog came up to me, tapped me on the shoulder, and asked what I was doing. I thought she was going to cry when I told her. She held my hand and pointed out that the postbox was on the other side of the road.

“I’ve not got the best eyesight these days but even so, the postbox and the dog dirt box are almost identical. They’re both red, the same shape and stuck on a post.

“I bet I’m not the only pensioner to get confused. The bloody council should never have put them so close together.”

“Every time I asked dad if he’d remembered one of kids’ birthdays, he’d say, ‘Yes, there’s a cheque in the post’. “When they never showed up we thought he was either losing his marbles or was just plain lying…

“What I’d like to know is why the people who empty the dog poo box have never wondered why Dad’s letters are in there. Surely they could have passed them on to Royal Mail or forwarded them on to the addressees with a letter saying where they were found?”