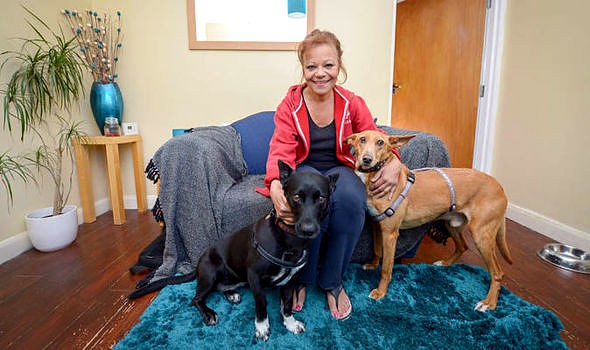 When English teacher Hillary Barrows couldn’t find work after returning to her native land, the UK, she was forced to live in her car.  She could have stayed in emergency housing, but she refused to surrender her dogs in order to do so.  Out of sheer desperation, she started a fundraiser and lo and behold – it was a smashing success.  She was even offered a home in a cottage on a 10-acre dog sanctuary!

“I can’t believe it. In three days I’ve gone from sleeping in an Asda car park to living in a bungalow in the middle of a country kennels. It’s wonderful.”

Hillary is from London, but lived in Europe for seven years as a private tutor, teaching people English.  She rescued her dog Robbie from Mallorca, Spain, where he was very badly treated.  Cleo was only three months old when she found her wandering the streets of Italy.

The tutor faced difficult times in France; clients refused to pay Hillary, forcing her to sell her jewelry to get back home to the UK.  But she had no money and no place to go. 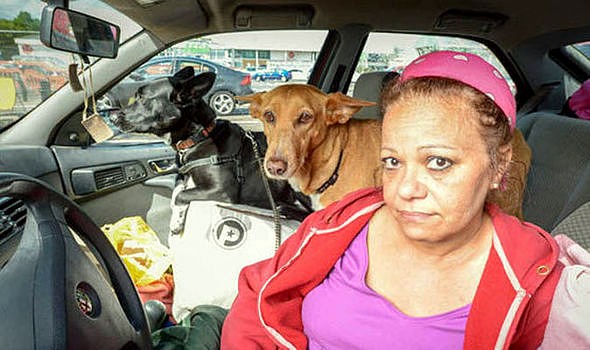 Hillary applied for government assistance, but because she had been out of the country for so long, she was ruled ineligible.  The Canterbury City Council told her she could be put in emergency housing, but she would have to surrender Cleo and Robbie.

She could never do such a thing – those dogs are the most important things in the world!  It was January, and she and her dogs had to live in her tiny Alfa Romeo, slowly bleeding her meager savings dry.

“My life was so miserable.  If it hadn’t been for Robbie and Cleo, I don’t know if I would have been able to carry on,” she said. “There were nights when I would sit in my car and cry and my dogs would put their heads on my lap and comfort me.”

After months of living in a grocery store parking lot, and not knowing what else to do, Hillary started a GoFundMe page.  Last week it went viral, bringing in over $15,000.  But in the meantime, while she was at a McDonald’s where she would go to take sponge baths, a dog trainer approached her and gave her the offer of a lifetime. 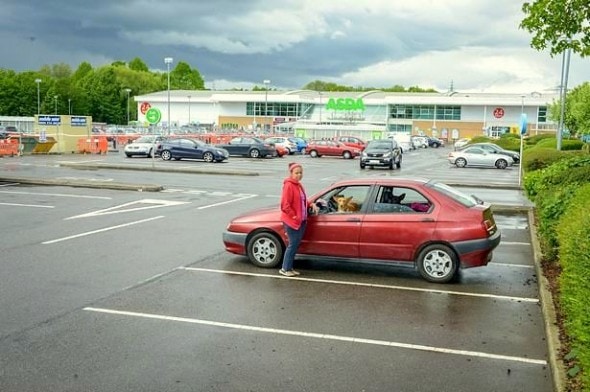 “Perry walked up to me and said that he had been told about my plight.  He’s generously let me and the dogs move into a cottage in the middle of his estate, and he’s even said that I can start working for him if I want,” Hillary said.  “I couldn’t believe it, he’s just been so kind to me.  Everybody has, I can’t thank people enough for the generous donations or kind messages of support.”

Perry has 10 acres of land in the country that serves as a dog-walking center and sanctuary.  It’s ideal for Cleo and Robbie.

“Now everything has turned around and I’m on top of the world. I’ve been here since Sunday – it’s been unbelievable sleeping in a proper bed again,” Hillary gushed.  “Of course, the dogs sleep on there with me, but it’s brilliant. I really feel like I’ve won the lottery.” 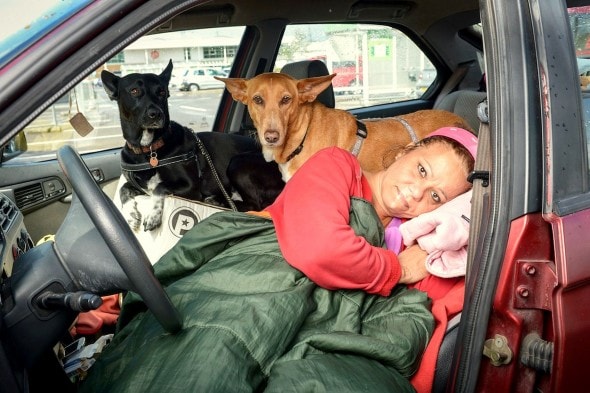 “There are loads of best bits about being in a house again, but the bed is definitely a wonderful thing.  Also, having hot showers is brilliant. And I’ve finally been able to clean my car.  The dogs are happy, too – you can see it in their faces.”

Because she was given more money than she could have imagined, Hillary wants to make sure she pays the kindness forward.

“One thing that struck me is that I was not alone in my struggle.  So many people left kind messages about wanting to help because they themselves were in the same state I was in.  We couldn’t get rid of our dogs – they are our children. So now I want to help others, as much as I can.”

To donate to the fundraiser or read more of Hillary’s story, click here. 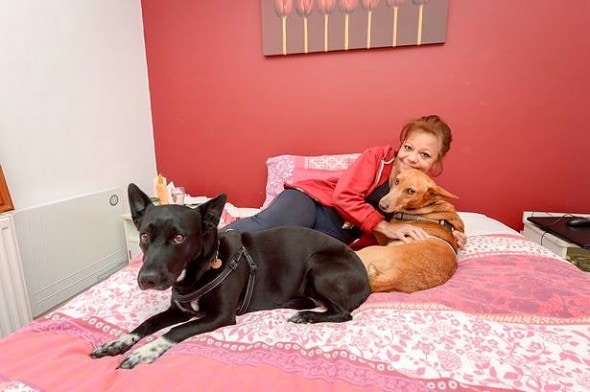