Angie Gamades came up with the idea back when she was a special education teacher at Chaska High School in Chaska, Minnesota.  She would often bake with her students who fall on the autism spectrum, as the methodical and repetitive work is soothing to them.  Today, she’s turned the idea to the adults, and has brought them in to start up a dog treat bakery, because she believes adults with intellectual disabilities are often overlooked.

Her baking with the students was such a hit, that they would often call her outside of school hours to invite her to come and bake with them.  It didn’t take her very long to realize that there was a ton of untapped potential in her students.  So, it just seemed like a natural next step that was also a great way to create some meaningful jobs that pay full wages for a group of people that so badly needed it.

The issue she saw had to do with after her students would graduate.  Sure, there were programs out there that would get a good number of the students hooked up with work.  However, the work was often menial, and the people were often underpaid.

So, Gamades got together with a fellow teacher at Cedar Ridge Elementary named Kyle Gallus, and they rented a commercial kitchen.  Then they hired on six former students to bake dog treats two nights a week and started paying them a full, hourly wage.  Finley’s Bakery was officially opened for business for real! 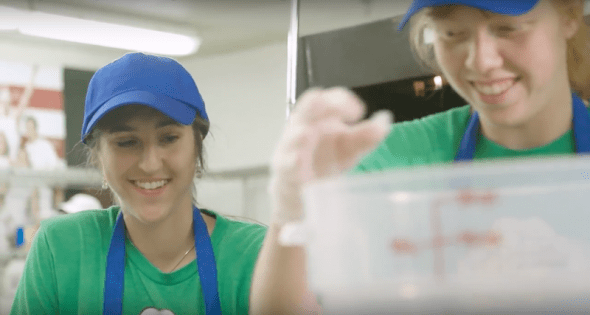 “A lot of our employees do janitorial or packaging work during the day, and that doesn’t really inspire them,” Gallus says.  “They look forward to coming into the kitchen so they can talk and sing while we bake. It’s one thing to just have a job.  It’s another thing to feel truly a part of something.  No employee should feel like you just show up to work, and you move on at 3 o’clock.”

The work is hard, and often has some of the employees doing things a bit outside their comfort zone.  Sometimes, dealing with the public directly can create a lot of anxiety for some of their employees.  The idea is to expose them a little more each time to help them get used to the things that maybe make them uncomfortable.

“Not every employee is comfortable going out into the public and selling treats,” Gallus says.  “What we’ve found is with the right setting, with the right coaching, our employees can do sales just as well as you or I.”

One young woman was terrified of dogs, but she wanted to try selling treats at a dog event.  After a few of these events, she felt safe enough to come out from behind the table and give out samples.  Now she’s rattling off all sorts of product info to customers with ease.

Finley’s is next endeavor trying to make their business mobile and is fundraising to get a Bark Truck, which will be selling goodies at pet adoption events, dog parks, etc.  If you would like to help them achieve their goal, please click here.