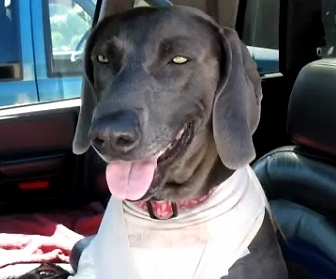 Unable to afford emergency care after a freak backyard accident, A California family relinquished their dog to the SPCA to be euthanized nearly two weeks ago. Frank Martinez said he and his wife have been grieving the loss of Kayla since then – and could not believe it when they learned that she was still alive this weekend.

Martinez said Kayla was injured when she fell. “The concrete was wet and she slipped and fell on a spike we used to keep the dog tied to go round and round. It ripped a huge hole in her chest,” said Martinez.

The family rushed Kayla to a vet, and were devastated to learn that they could not afford the charges necessary to treat her. It became clear in a matter of days that she would succumb to her injuries, so they brought her to the Central California SPCA to be euthanized and said a painful goodbye.

“I gave her a huge hug and I told her I was so sorry I was poor and I hoped she could forgive me and then she got off and they took her around the corner, and that was the last I seen of her,” said Martinez.

That was June 20. “It was very hard, very difficult, we were crying constantly. Everywhere I looked, I would imagine her being there,” said Francine Martinez.

On Friday, the SPCA called the family to deliver some very good news. Moved by the heartfelt farewell they had witnessed, employees had decided to take on Kayla as a special case – and they saved her life.

Martinez was speechless. “I was having a heart attack. I was overcome with emotion,” said Martinez.

The relieved family retrieved Kayla this weekend, and cameras were rolling when they were reunited with the dog they thought they had lost.

48 thoughts on “Tearful Reunion for Family and Dog Believed Dead”