Lily was shot several times and left to die, but her life was saved thanks to a group of teenage guys.  Now she is going home with a family that will love her forever.

Sixteen-year-old Cole Bodelson and his friends were off-roading in Santa Fe three months ago when they came across a blind black Lab on the brink of death.

“We saw her paw which had been severed all the way around, she was laying on her paw like protecting it, and we were afraid if we picked her up she would have like some kind of horrible wound under there,” Cole explained.

She had four bullet wounds, and her paw had likely been severed for weeks.  Two of the bullets are still lodged in her body. 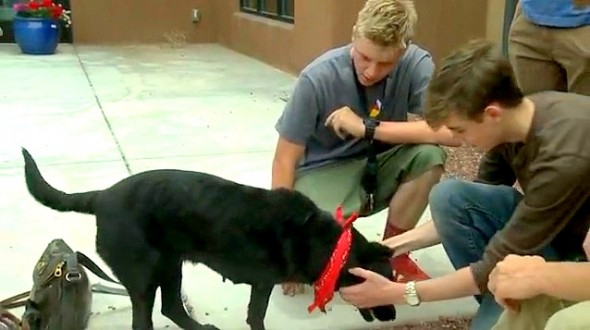 Cole gently scooped her up and the guys took her to the Santa Fe Animal Shelter.  The rest of her leg had to be amputated, and though she cannot see, she is still full of life and love.  Today she met her new family.

Eleven-year-old Evan were looking online for a Guinea pig, but found Lily’s story and went home with her instead.

“I couldn’t stop thinking about her,” said Evan’s mom, Denise.

Denise and her family met Lily’s rescuers last week when they went to visit her.

“That they took the time to care for her, to try to get her help is really remarkable, it speaks to their character,” Denise said. 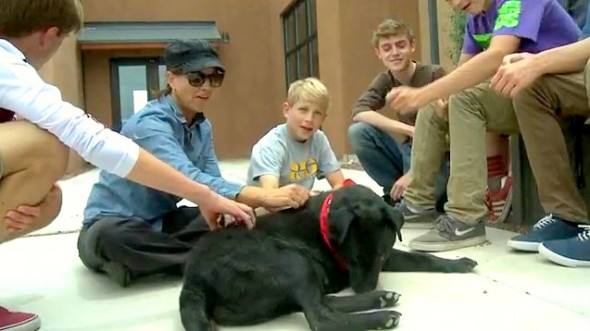 “She looked pretty rough and when I was here I was completely surprised about how good the shelter took care of her,” Evan said.

Lily gained 15 pounds while she was at the shelter.

Her new family lives in Albuquerque, but told Lily’s rescuers that they are welcome to visit her anytime.

“I think that these guys will take really good care of her,” said Cole.

Detectives don’t know who shot Lily, but her cruelty case is still open.  If you have any information, please call 505-428-3710.